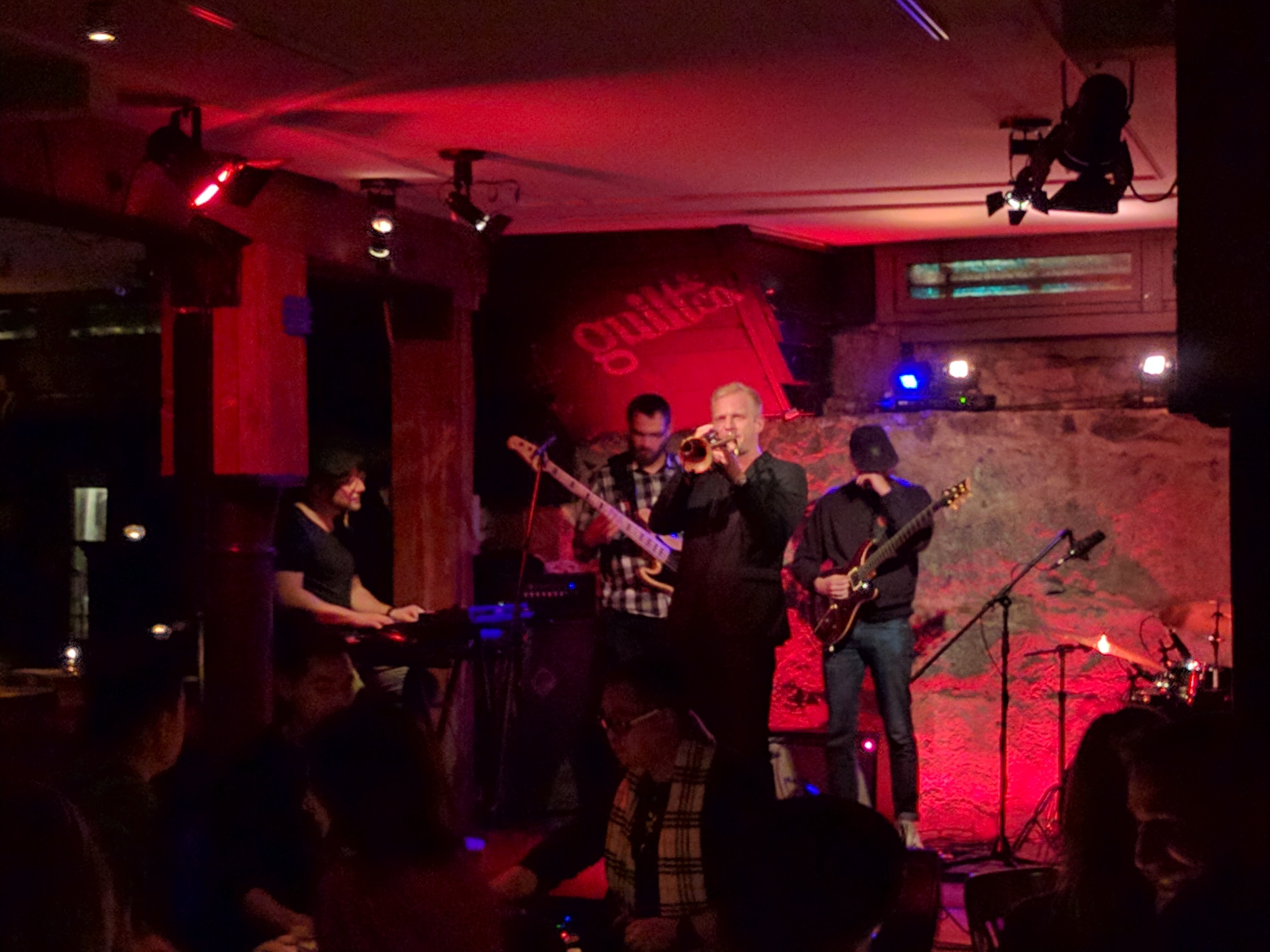 On a night that was supposed to be the beginning of three massive storms, Guilt & Co hosted a full house to Malcolm and his band's unveiling of their new CD “NEW FUTURES”.  Guilt and Company is a small underground live music bar underneath the Chill Winston restaurant in the heart of Gastown. It has earned itself a reputation for being a cool new place for trendsetters, tastemakers, artists, and moneyed professionals to go after a day's hard work. In the soft candlelight, Malcolm plays the trumpet with his three fellow musicians against the red lit background on stage. Pumping out relaxing yet fresh melody that is befitting of his crowd.

He's accompanied by guitar, bass and keyboard, and the band quickly captured the audience's attention. You could hear the quite murmur in the audience, a clink of “cheers”, and sometimes the distinctive shutter “click” of women taking selfies.  Most of the audience was contently enjoying this auditory feast of jazz, electronic styles with elements of pop thrown in.

Malcolm and his band played two sets with a thirty minute break in between.  He was dressed in all black, in round neck black t-shirt with a form fitting sharp black suit.  Most of the audience was in T-shirts and jeans, and there was a constant a line up outside.  Everyone enjoyed the lively atmosphere and soaked up the sexy vibe. 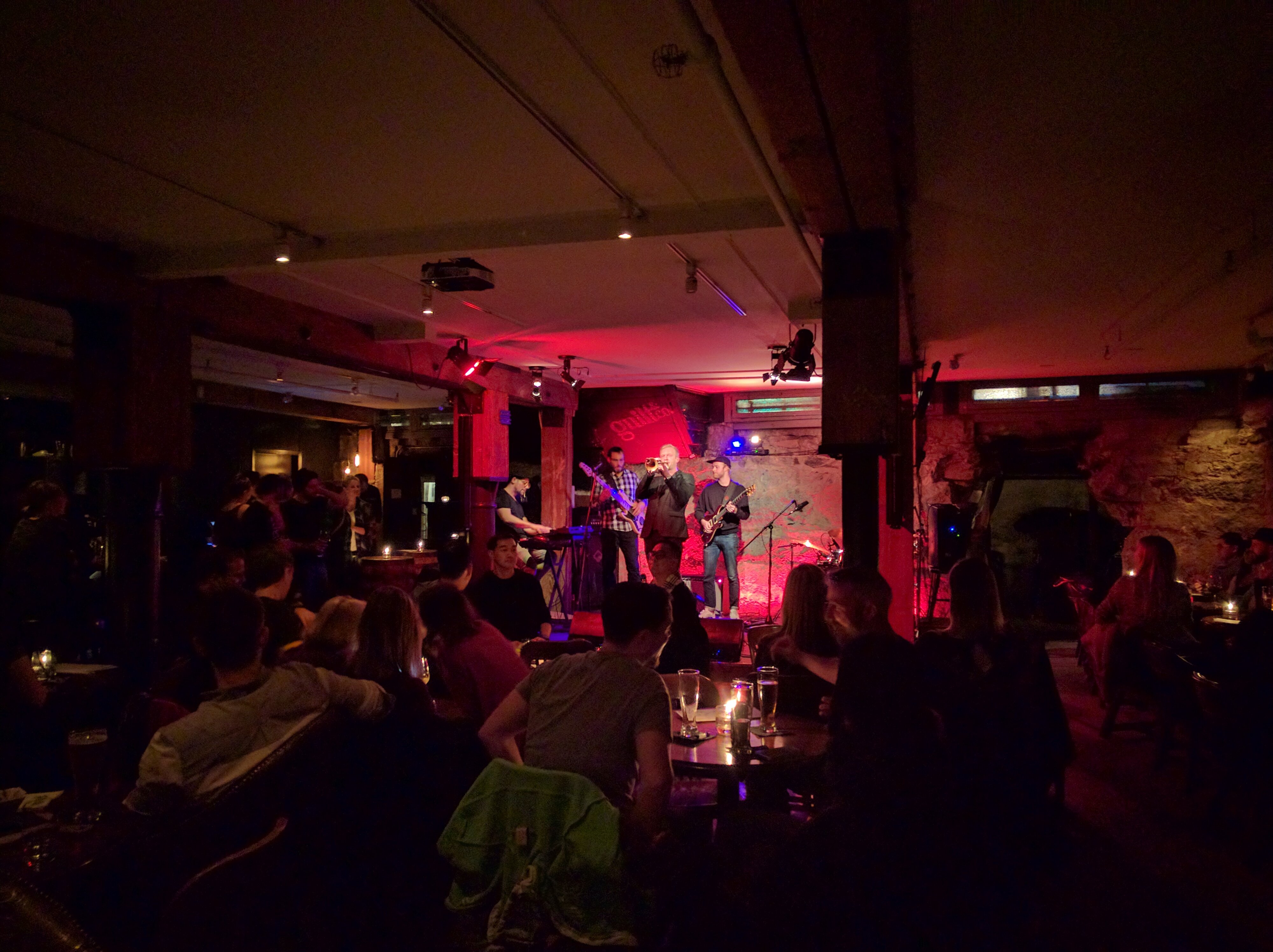 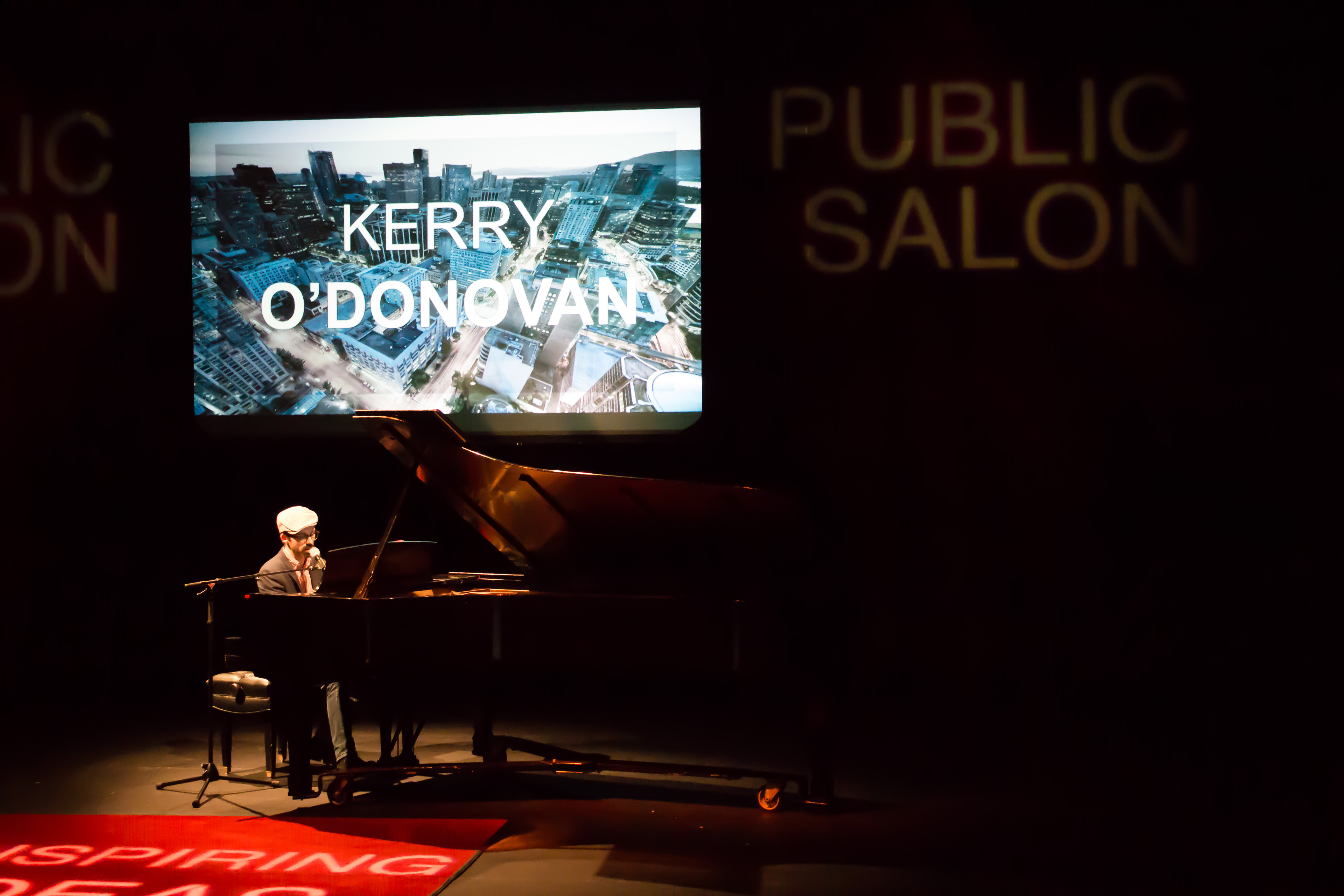 On an evening that was the beginning of three storms, people packed into the Vancouver Playhouse to gather for the 26th Public Salon to hear more stories from Vancouverites. 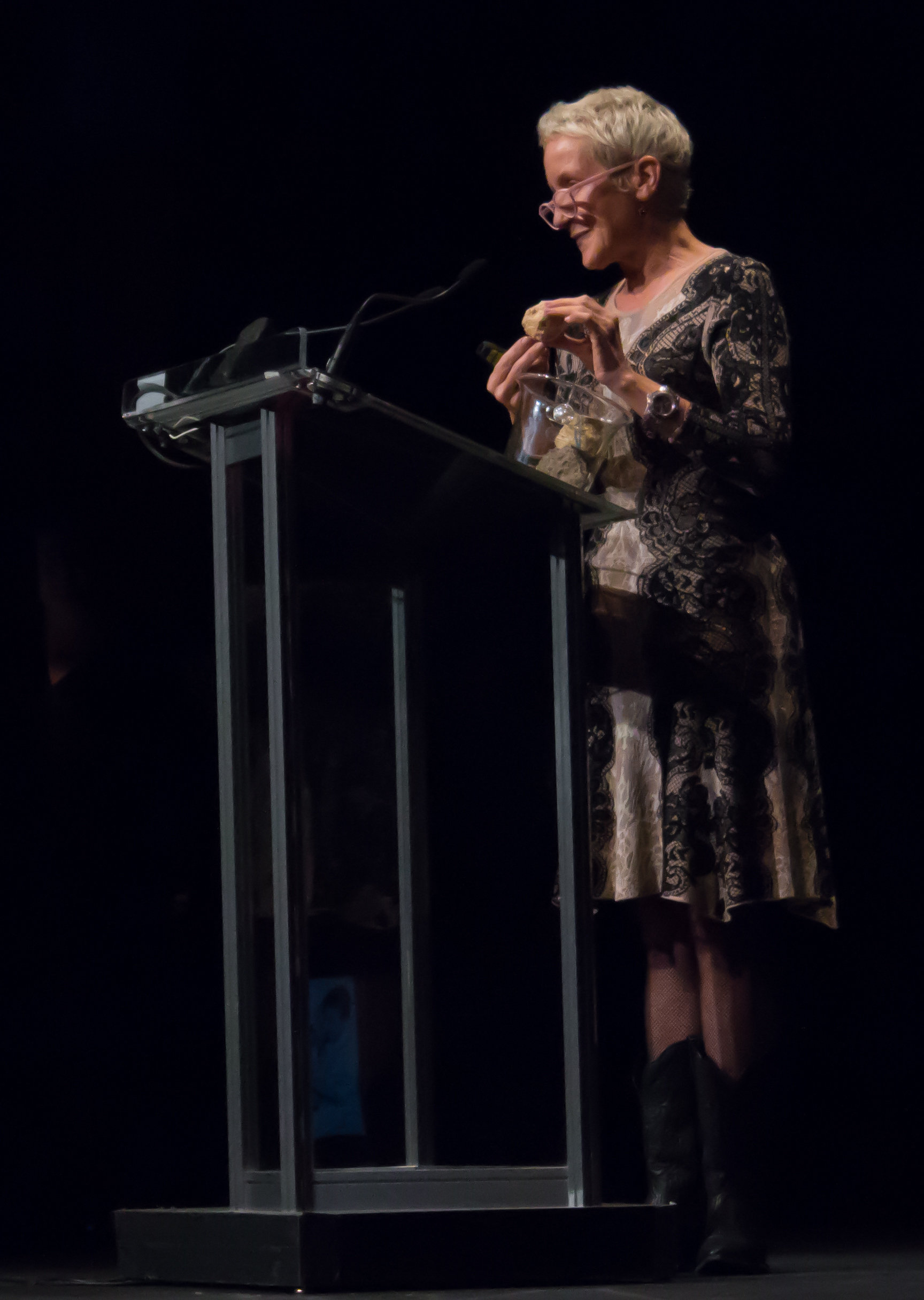 First up was wine educator DJ Kearney, whose speech was show and tell.  She brought a clear plastic container of interesting rocks, and told us stories of her childhood running around climbing trees, and going on long road trips with her whole family to explore different regions. Her father was a geologist and she spent a lot of time learning about different rocks. She carefully took out each rock in her collection and educated us on their name, history and unique composition, her fascination clearly visible through passionate retelling. She told us about her mother's inability to cook which lead her to take over the family cooking at the age of 12, leading to her becoming a chef. Later working at a restaurant, her life was changed by drinking a Spanish wine called Castillo Ygay. This pivotal moment led her down a path of much wine related travel and education and ultimately leading her to her current role at New District, which is an online hub for wine lovers. Here you could get information, education and buy wine.  DJ pointed out there is a coupon code PublicSalon for every guest in the program to New District, 15% off of everything when you visit www.newdistrict.ca before December 15th.  DJ came across as a free spirit who avidly followed her passions, and was not afraid to get dirty. She showed pictures of her doing the Ironman Marathon races, obtaining her black belt, and hanging off of tree.

After this exciting speech about rocks, food and wine, we met an experienced designer name Paul Conder who has worked with major brands like Nike, Starbucks, Starwood, etc. Paul shared that he began his career as an industrial designer, who really had to interact with the final user and observe their normal behaviour patterns to create products that are suitable. He explained that with the prevalence of how much time we spend in the digital world, major brands must allow their various departments work together to create a smooth and seamless user experience. This applies to their physical retail store, their product, their website, and their app. This involves a whole wide range of people, from branding and marketing, engineers, to industrial engineers, customer service, website development, and social media.  Paul points out that engineers tend not to talk to people, but works great with machines, whereas designers want to make things pretty, and marketers wants to communicate with the end user, where customer service actually are in touch with the end user. Yet all these groups of people don't usually talk to each other, which creates a chaotic and inconsistent experience for the customer. As Paul explains all these different components, it seemed very obvious, yet it seems like the world of a NASA astronaut to line up all these different departments and talents to work together, so I applauded loudly when he walked off the stage.

Heather Watson, the Karaoke Therapist was next!  I was really intrigued and hugely anticipated what she had to share. She seemed very nervous, and spoke like an ADHD child who needed to go pee. She explained that singing is very therapeutic, and at times, she would hand people tissue as they cry out loud.  Heather says everyone has a song, and nothing is better than singing your song and have everyone join in. She showed a picture of a Karaoke microphone that she's currently developing to help people with disabilities or blindness so they could enjoy the joy of singing Karaoke. One take away I thought was neat that Heather pointed out in Western countries, karaoke is usually in an affordable public setting, a pub or restaurant,. Whereas in Asia, most karaoke is in private rooms designed for a group of friends and it can be very glamorous. 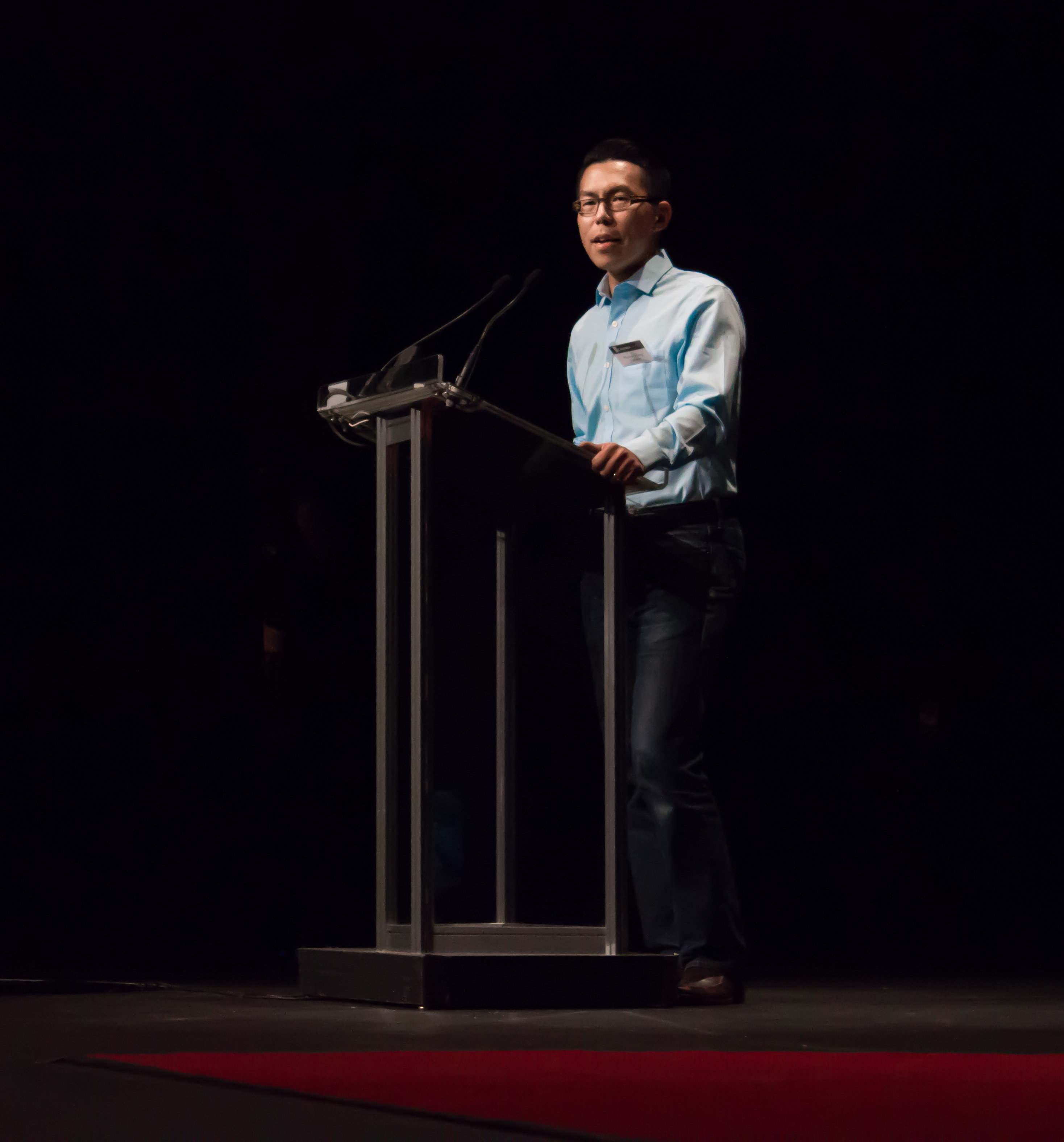 Following Heather, was my favourite speaker of the night Holman Wang.  He's a Chinese man in his early 40's who has trained as a lawyer .Several years ago started as a children's author and illustrator along with his twin brother Jack for their company Cozy Classics. They have produced childrens books for the Star Wars series, and classic novels such as Moby Dick, and Pride & Prejudice.  These books are pictures that Holman take after he has stabbed yarn thousands of times into incredibly adorable little characters from the original book.  He also painstakingly builds the sets and take photos on location to keep it authentic. The whole crowd oohed and ahhed when he showed a slide of some of his work and as he explained his process. They laughed even harder the stark contrast of him being a lawyer and developing this second career. Holman was very proud to share some of his recent success, of visiting Lucas Films, his work as a Google doodle, going to Comicon to sign autographs, and going to elementary schools to teach children how to make yarn figurines.  Holman's deadpan humour was right on time, and his open mindedness and dedicated to craftsmanship brought awe from the audience.  He encouraged all to follow their passions even when you are already on a solid career path.  He cautioned that you play it low key until your career career takes off, then tell people. 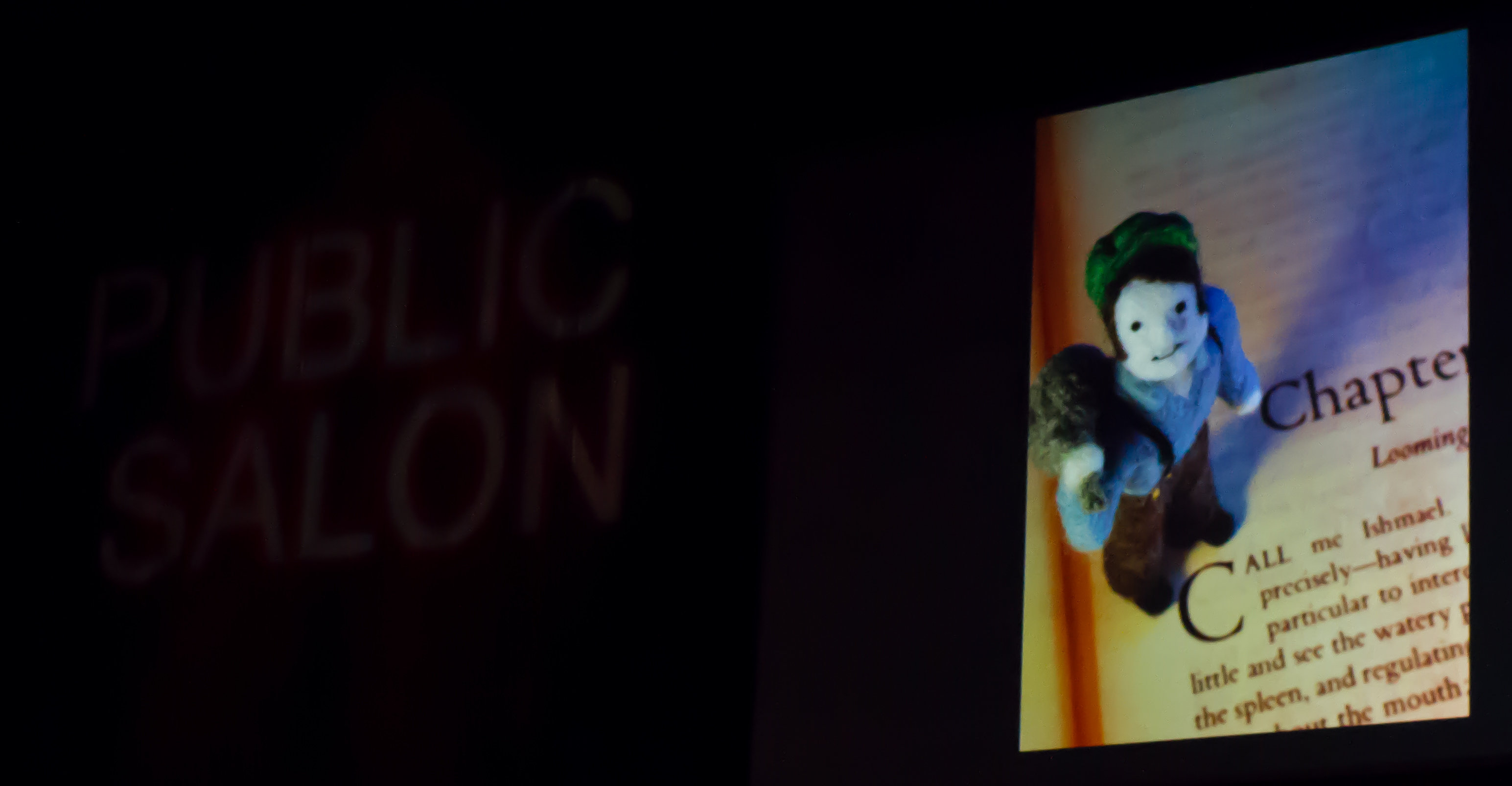 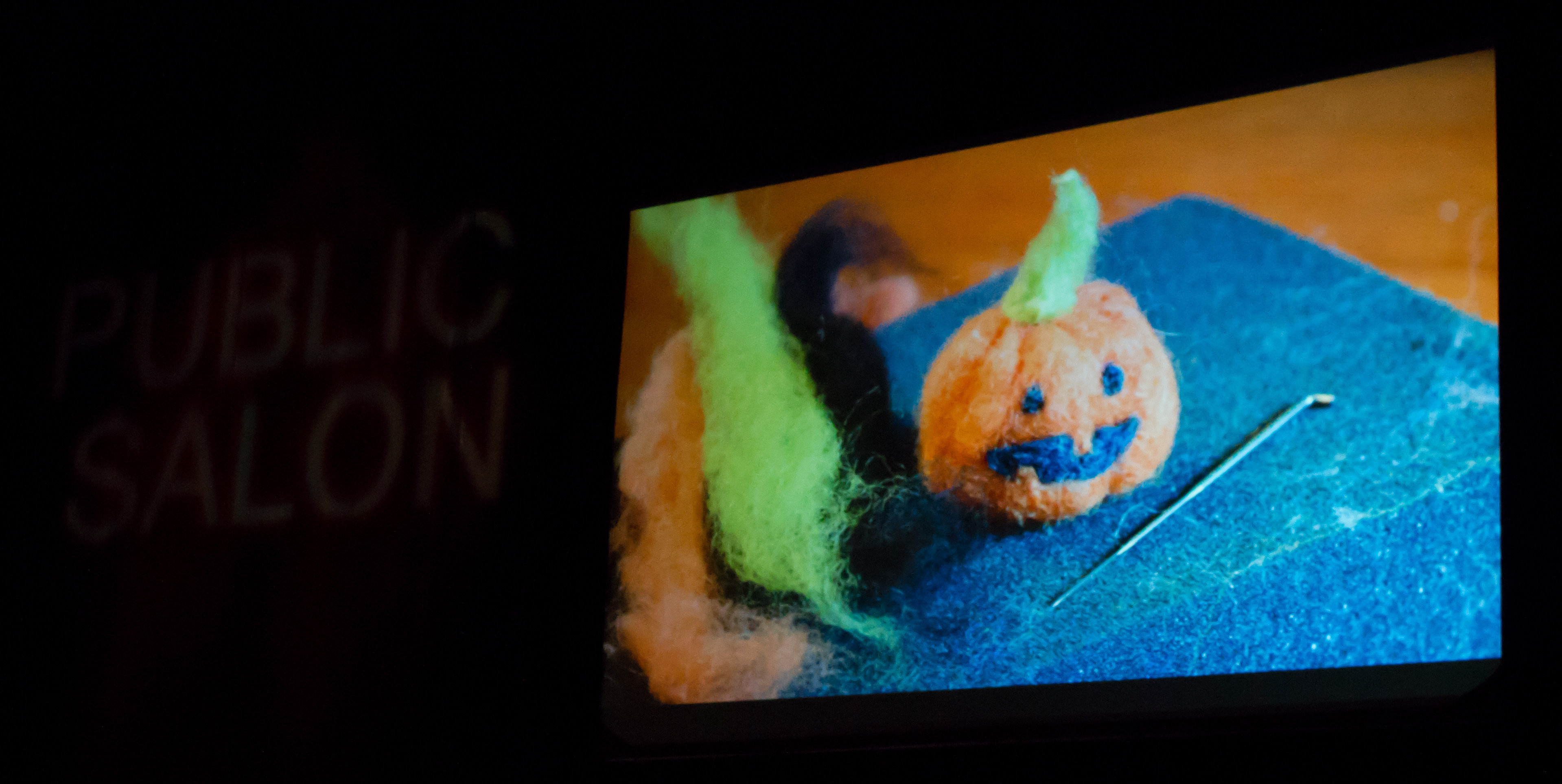 Dr. Diane Finegood is a researcher, systems thinker who talked about metabolism and weight loss. She even shared her own personal experience of weight loss of 80 lbs. She shared the science between nutrition. 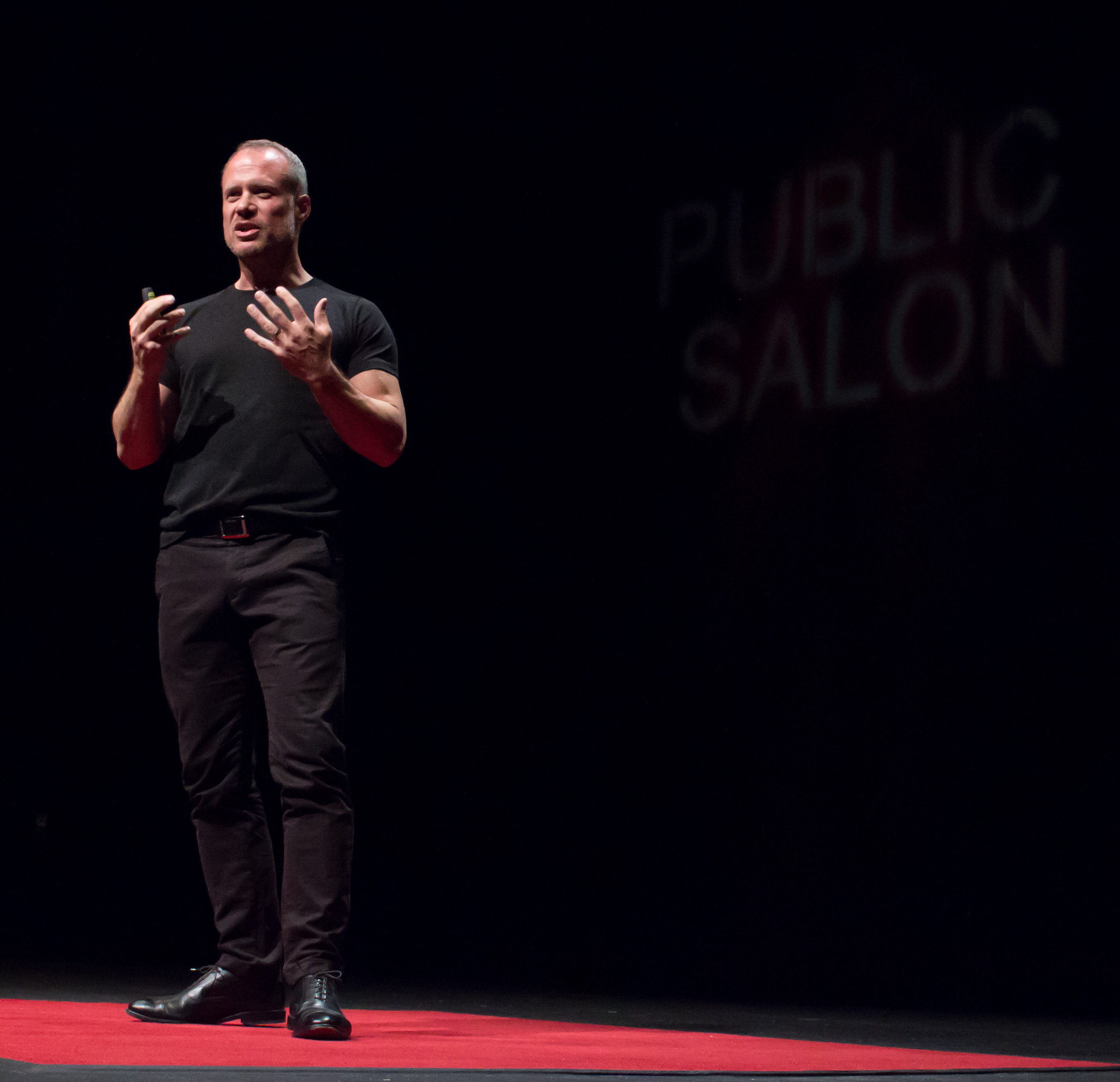 David Allison, a consumer culture forecaster almost jumped onto stage, talking quickly and wrestling with the challenge of giving a speech in 7 minutes. He points out that each generation has their items of envy, for millennials, its the ability to travel to exotic locations like Bali or India, instead of having the latest Tesla car in the driveway for baby-boomers. David also sheds light that right now, we have the highest education, best health, incredible technology, yet North American's overall happiness has not increased, so we must DO good, and BE good.

The last speaker of the evening is Howard Trottier, who is a physicist professor at Simon Fraser University, and an amateur Astronomer. He is in charge of the Trottier Observatory & Science Plaza, donated and by his rich brother. Howard excitedly talks and show pictures of the Starry Night program, where the local astronomer club members lug their telescopes to Trottier Observatory and Science Plaza once a week to welcome young and old alike to learn about outer space. Howard enthusiastically acknowledged the hard work put in by all the volunteers and the importance a sense of wonder to the advancement of science. He says, as a teacher, he has done some crazy stuff to keep his class interesting, and he showed a video of an experiment of a chemical reaction that was 10 feet high that looked like exploding rain. Howard emphasized that science is not boring theories, they must come alive for children and young people to gain a genuine interest, and it's never too soon to cultivate that passion. 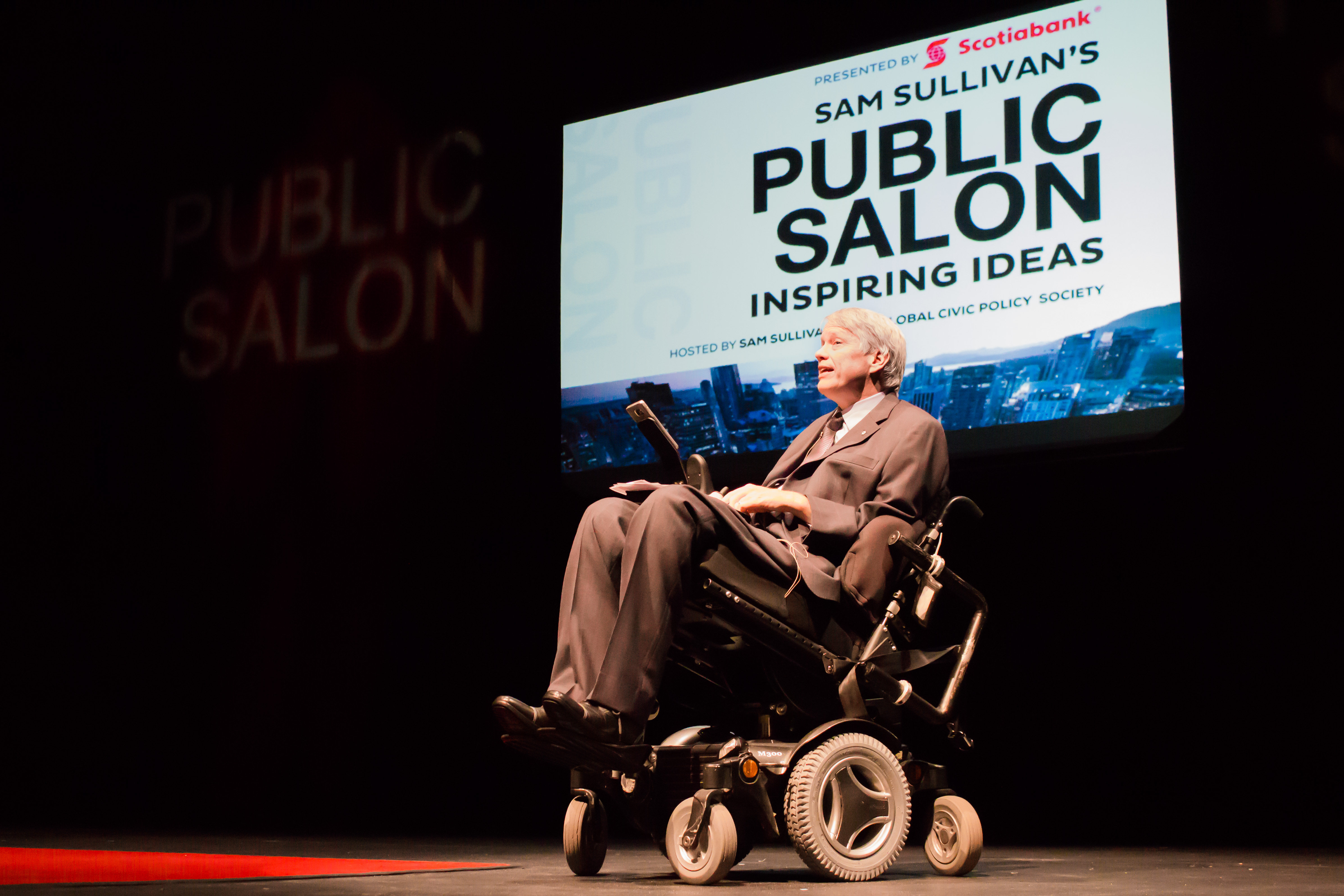 This Public Salon has an unique addition to the usual programming with a dessert menu reading contest between three contestants representing three local restaurants. Judged by Andrew Morrison, editor in chief and publisher of Scout Magazine, well known as the hub for foodie and wine lovers. Andrew did not make this contest easy, he informed each contestant that they have 2 minutes to read and up sell the dessert on the card and enticed them with a beautiful shiny glass trophy. First up was Neil Ingram from Cinara restaurant, and he had to pitch an upside down apple crumble pie. Neil came forward to the microphone, rolled his eyes sarcastically and said “Oh god, I have been an actor for 10 years, and the first time I'm on stage of the playhouse, it's to read a dessert menu.” which elicited a rowdy laugh from the whole crowd.. He then began to talk about love, just as we're getting worried about his time running out and the lack of connection, he ties it back in perfectly after a dramatic power pause.  He said: “Love, very much like pie, must be inside you for you to feel good.” which made everyone laugh out loud at Neil's superb creativity in creating a romantic mood and stringing us along. 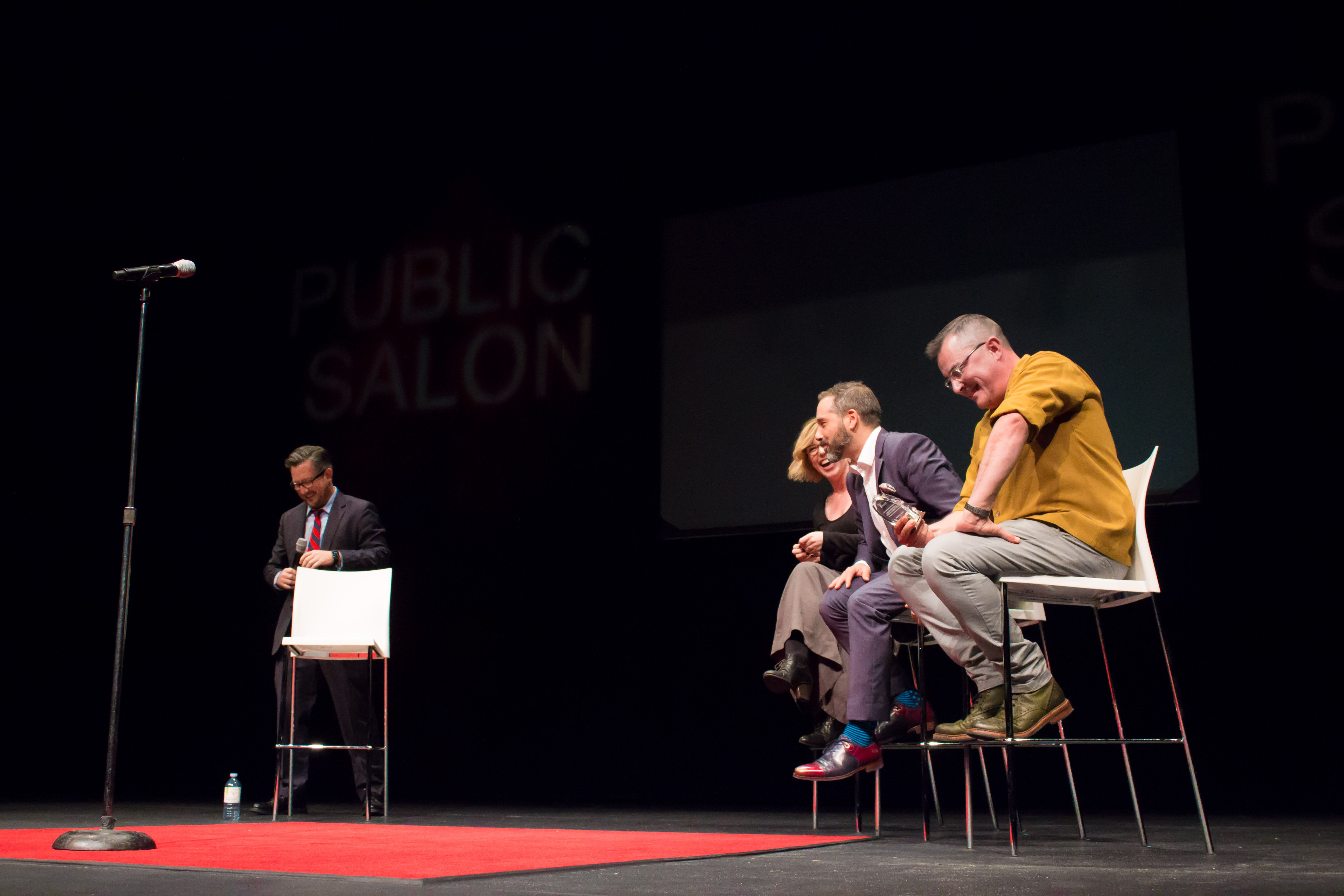 The second contestant is Michel Durocher from Sardine Can restaurant who had to sell us a deconstructed tiramisu.  Michel used his French gentlemanly charm in describing all the ingredients of a tiramisu, and sarcastically told us that we don't need them all together. That it's better to eat the lady finger and the pudding, and the brown sugar coating separately.

The third contestant was a pretty young lady from Cafe Medina name Jenna Briscoe, who had to up sell locally grown organic lime pie.  Jenna laughed for a good 20 seconds and points out that British Columbia doesn't grow lime, then asked if she could get these organic local lime from Neil or Michel, which turned out to be a no.  Jenna did her best to make the dessert sound delicious as we imagine this impossible dessert.

When the contest was over, Andrew determined the winner by audience applause, and Neil Ingram won by a long shot.  He seem overjoyed and loudly proclaimed he'll get a gold chain and wear it around his neck, which got us to laugh even more.  It was a spectacular finish to a lovely uplifting evening.