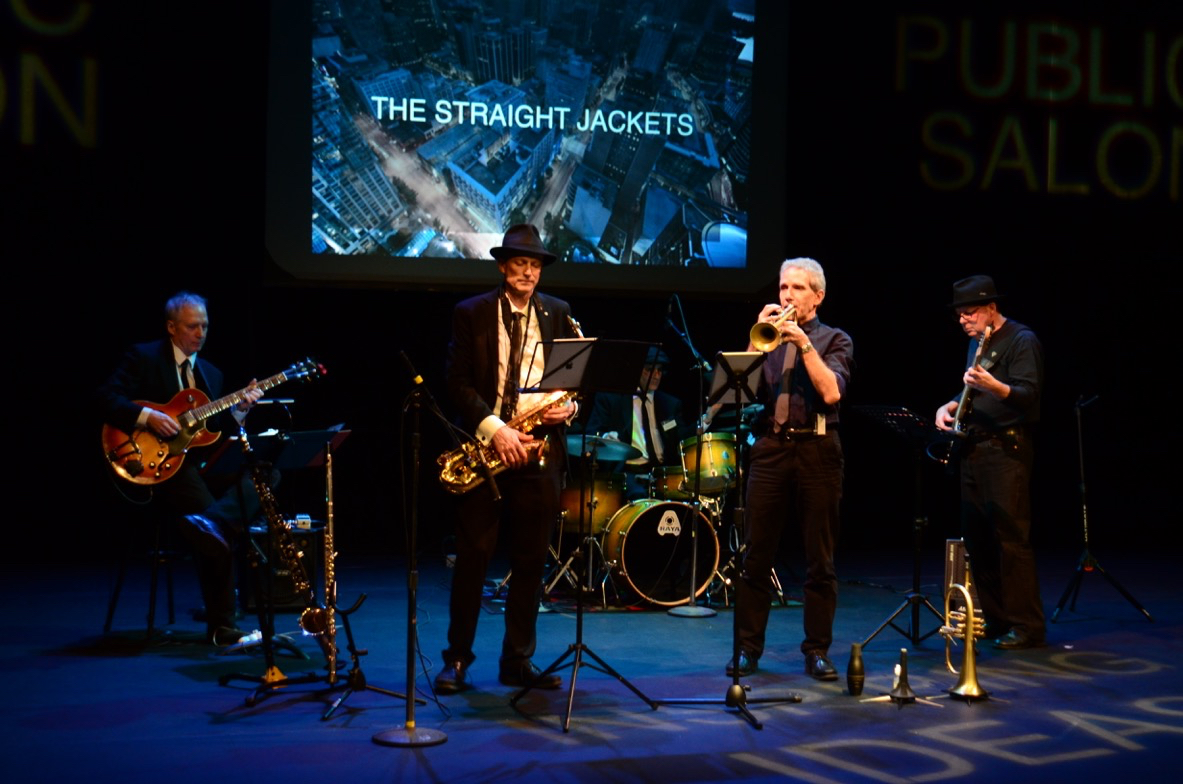 Trevor Stokes, a hyper, athletic high energy high school teacher kicked things off by describing the type of school Britannia Secondary, and the kids the various challenges his students face on a daily basis.  He shared how he incorporated 40% of his teaching to involve physical activity, and getting his students to participate in marathon give them a platform to build endurance, and learning about teamwork. His small team started with five students, then grew to 20 and eventually now close to 40 strong.  They even took the students to hike up Mount Kilimanjaro in Africa, just a little school on the East Side of Vancouver!  They were the first North American high school to do that.  Trevor is very infectious with his sense of pride, and inspiration. He reminds me of a cheerleader, giving everyone the pat on the back, and ears to listen when you have troubles. What great qualities to have in a teacher! Especially for the kids in his school, who may lack the positive parental role model in their lives. The photo in the booklet made him look like a badass, which he apologized when he got up to speak, saying his parents definitely did not appreciate it.  Mr. Stokes must had a fan club, as his speech draws to a conclusion, he had thunderous applause from the audience. 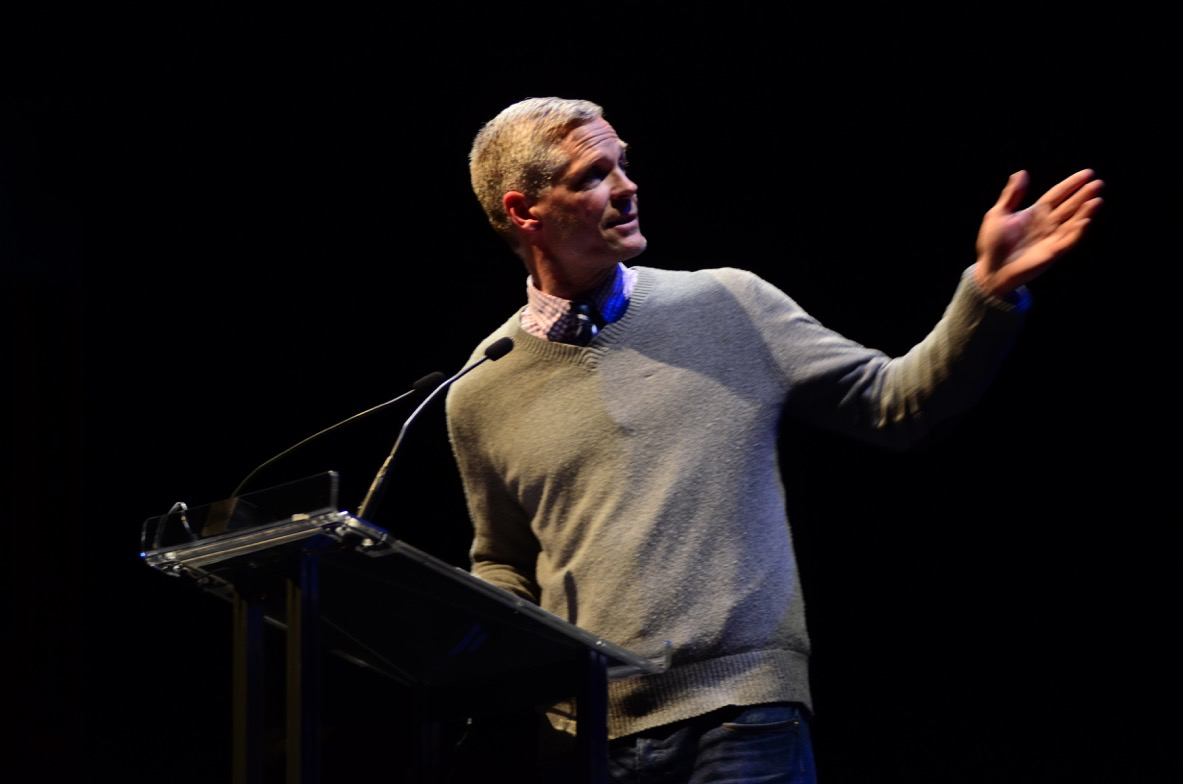 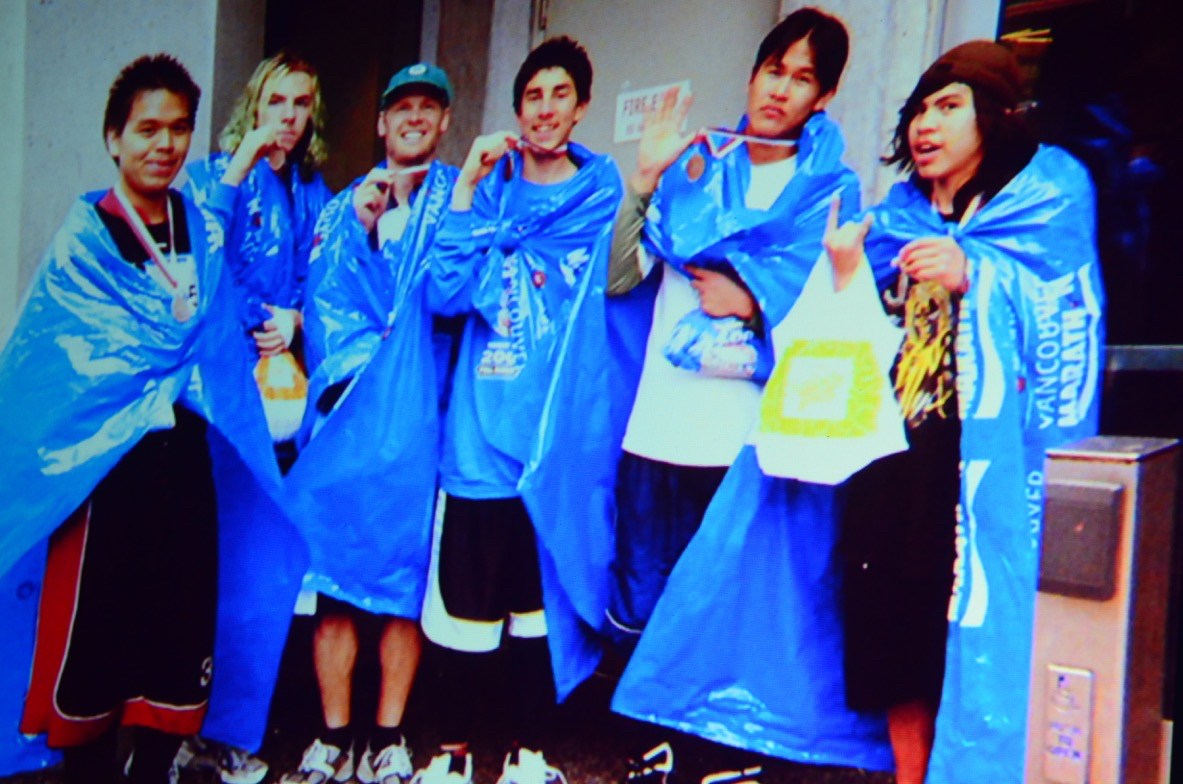 Second speaker Brett Finlay opened his speech with an intriguing statement, that we're actually not human, but more microbes. His PowerPoint started with some shocking statistics, that there are on average 20,000 microbes in poop, so imagine how many microbes are on a human being.  Of course this piqued all our interest, and he answered, that they're everywhere, on our skin, in our intestines, in our ears, in the food we eat, liquids we drink, etc, essentially everywhere.  He shared about the book he co-authored titled "Let them eat dirt: how our quest for clean in making our kids sick” actively promoting natural birth, breast-feeding and kids playing in the mud to gain healthy microbes which will keep allergies and various illness at bay.  It's a fascinating talk that made us zero in on what we don't see. 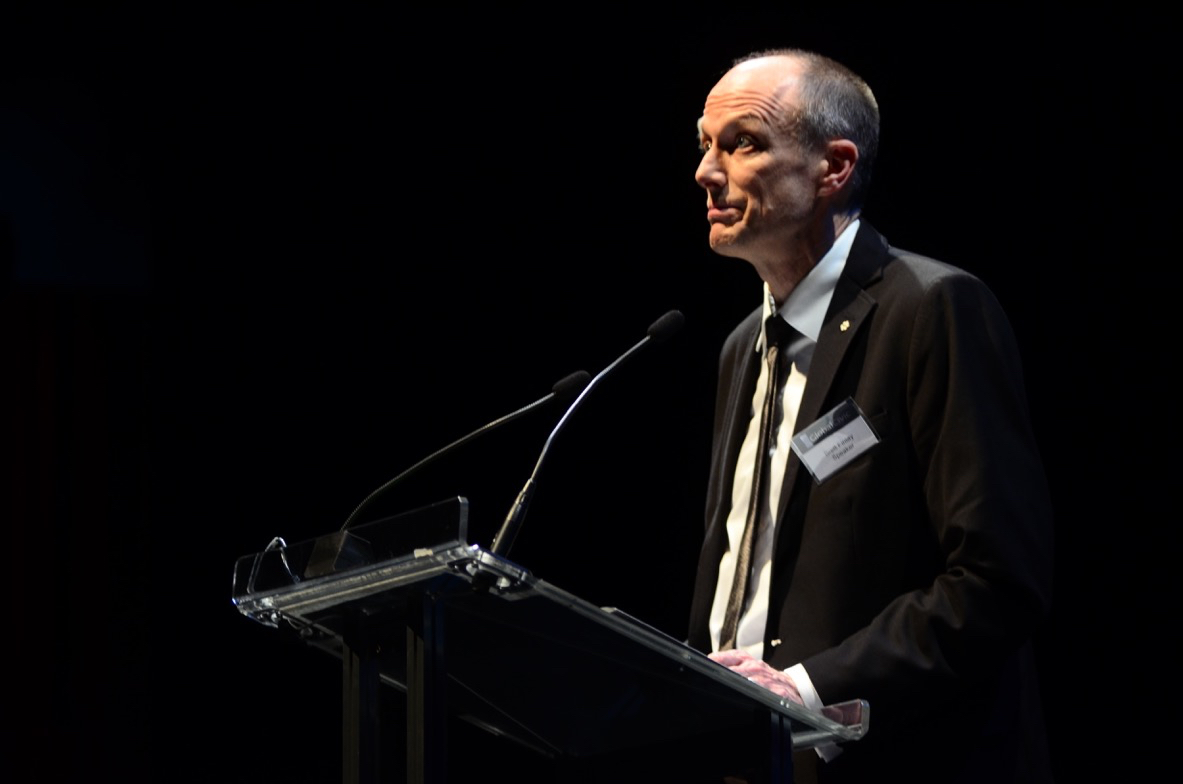 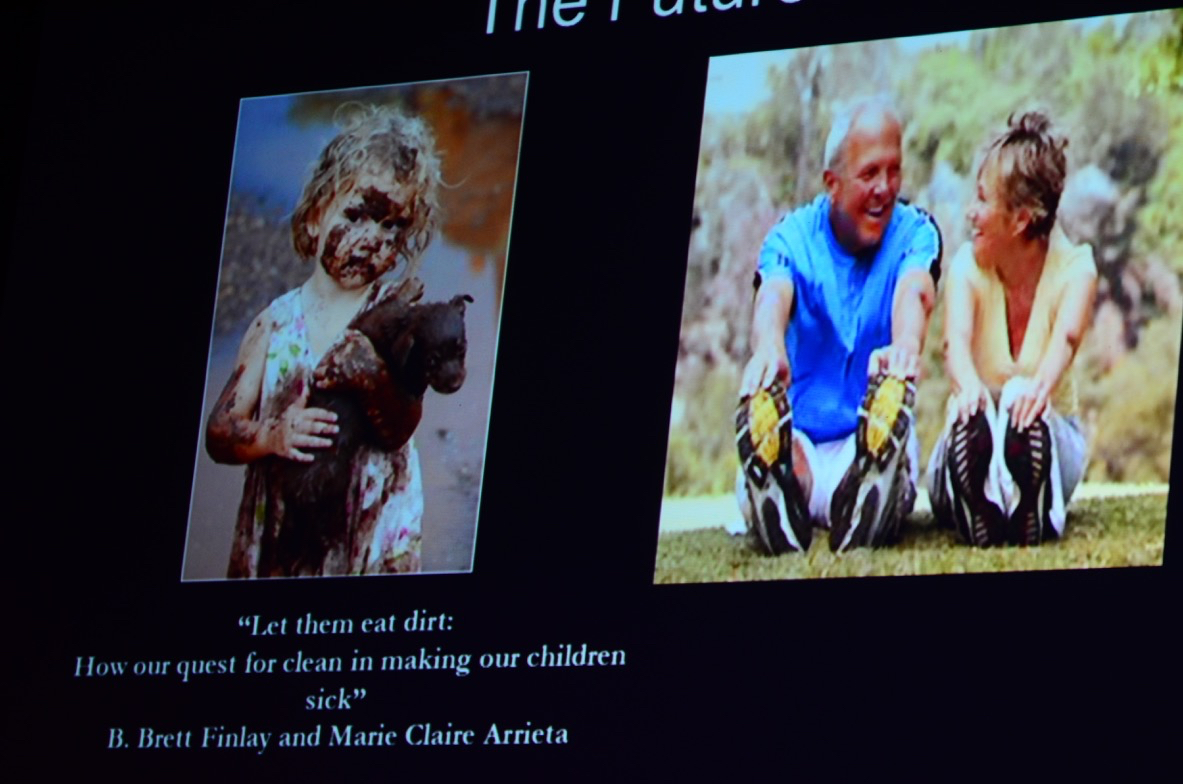 Next up was a very pretty young mother name Eran Sudds who started a charity called “The Good Mother Project” after she developed postpartum depression. She had a total breakdown during a B.C. Ferry ride where another woman reached out and listened, hugged her while she cried and told her she was enough. That short connection gave her the encouragement to keep on going, and inspired her to start this charity which provides inspiration, encouragement and a platform for mothers who suffers from postpartum depression to share their stories.  Eran is a professional photographer so she gathered the many mothers she knew who had postpartum depression and did inspirational photos. She then shared it on social media to spread the inspiration, which got amazing positive results. 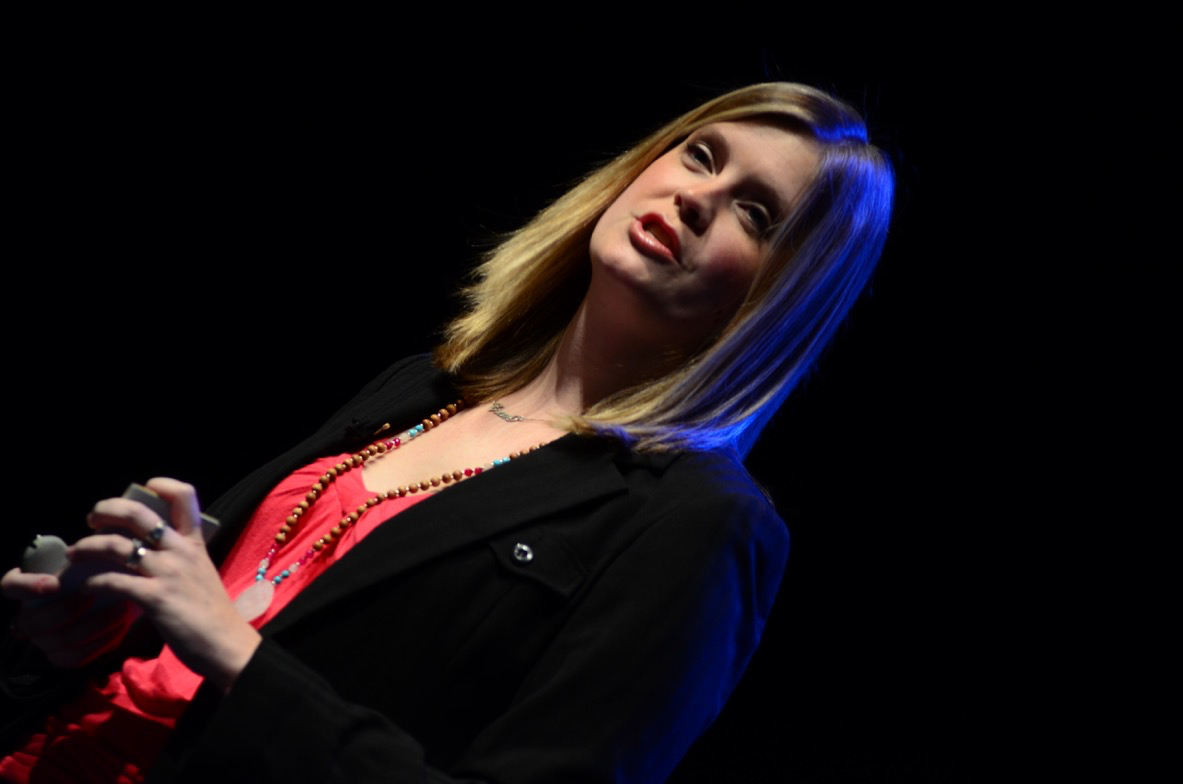 A handsome, tall, stylish man with the most awesome shoes walked onto stage with his silvery hair began tell us the story of how he became the owner of a little grocery store in Holmfield Manitoba, population 14. He fell in love with his house because there were songbirds, which brought him right back to his childhood. His dog loved it, and that counts for something. He showed pictures of the small grocery store that he bought from its original state. He began to recite funny poems he made about his journey, and shared pictures about the graveyard in Holmfield because that's where he'll live out his natural life.  Bill Richardson was posh and witty, and it's refreshing to see an urban gay man choosing to move to a small rural town for retirement. 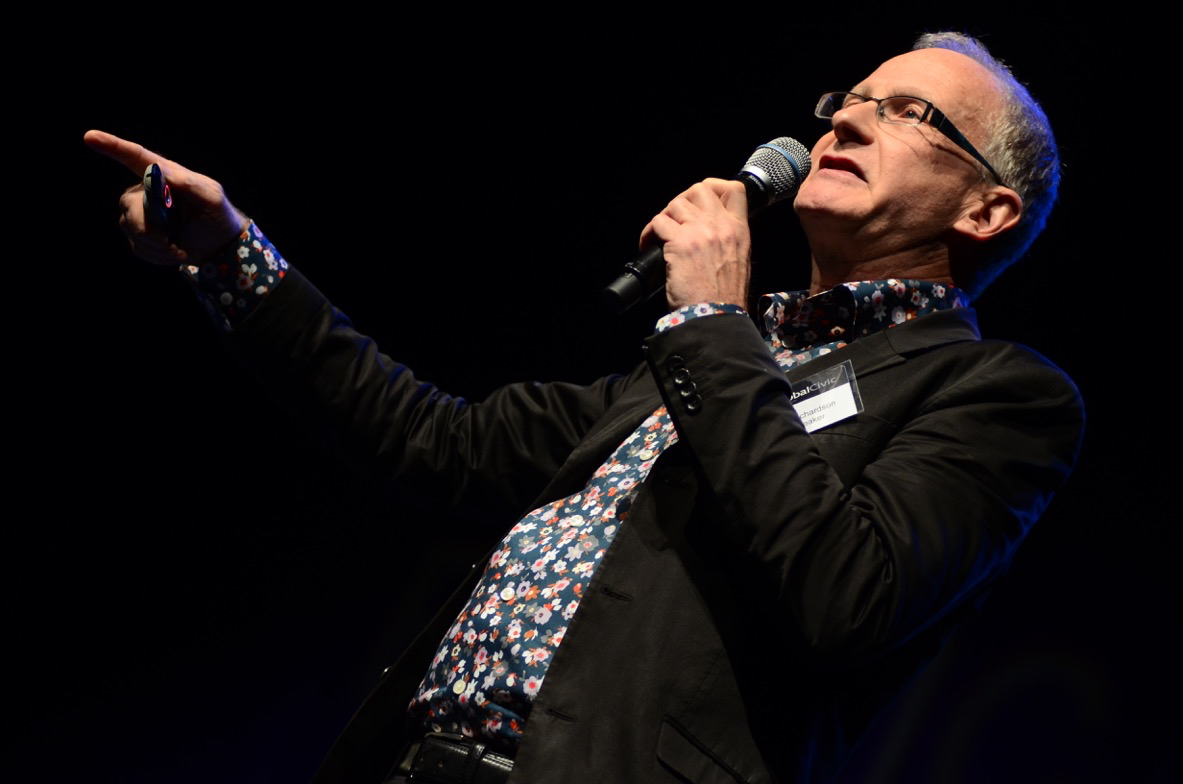 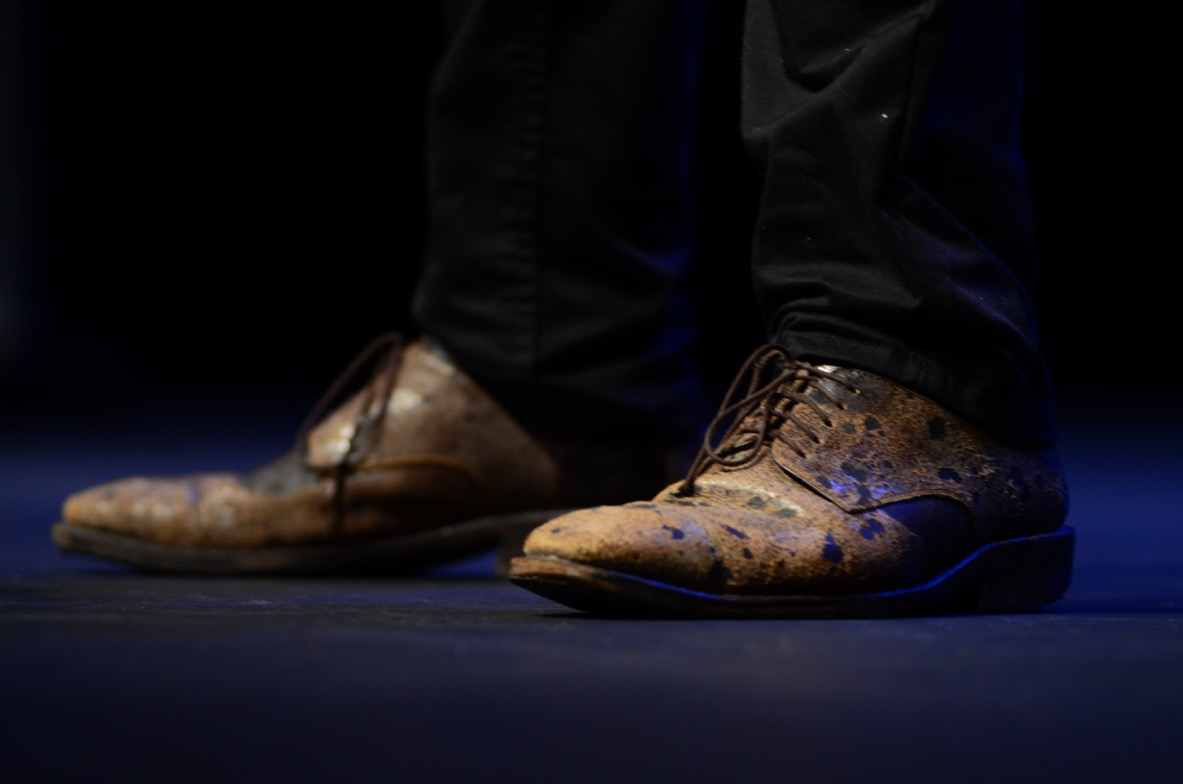 Robert Sung burst onto the stage with his very colourful Chinese outfit, looking ready for Chinese New Year. He's a 4th generation Chinese, and he operates Wok Around Chinatown, giving him a vehicle to share his Chinese Canadian heritage and values through storytelling. His slide includes a photo where he's holding up two strange-looking animals inside a Chinese herbal store got a “ahhh” reaction from the crowd.  He shares with the audience that one is a Gecko, which is great for relieving flus and diabetes, and another is octopus, which is delicious in soup.  Robert has 25 years in the culinary industry and on his tour takes his guests for a culinary and cultural adventure. 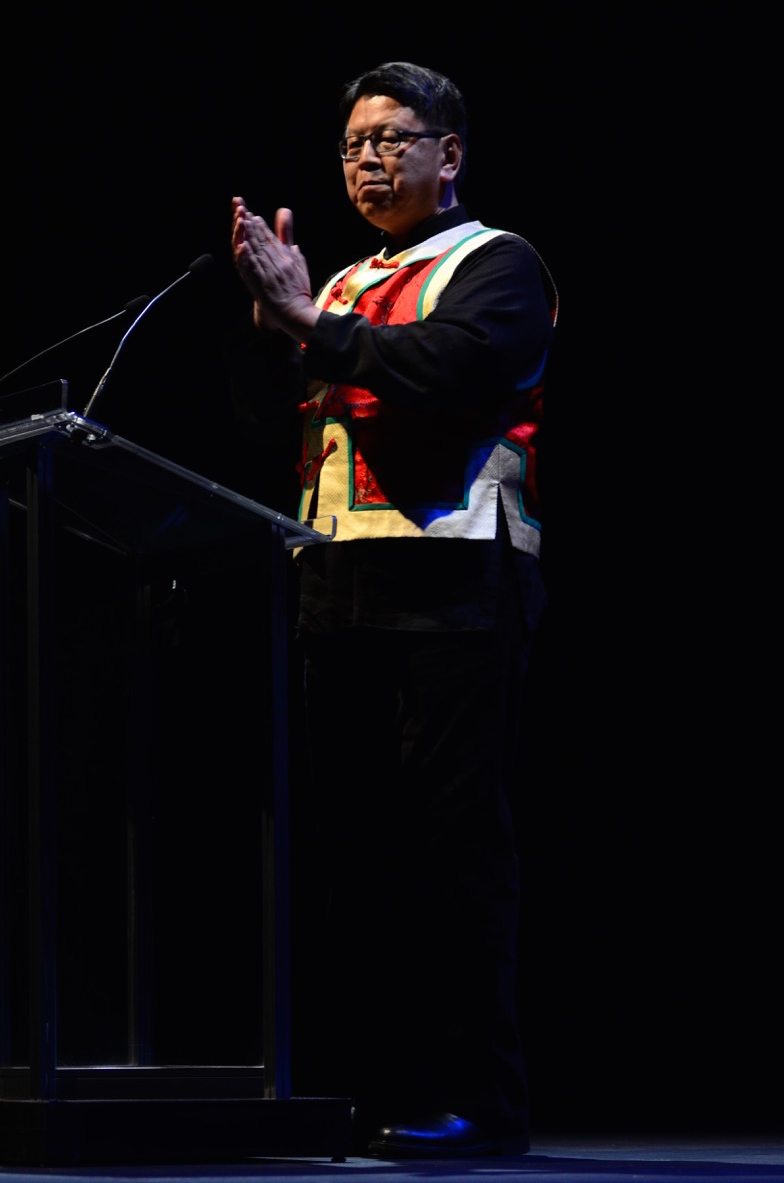 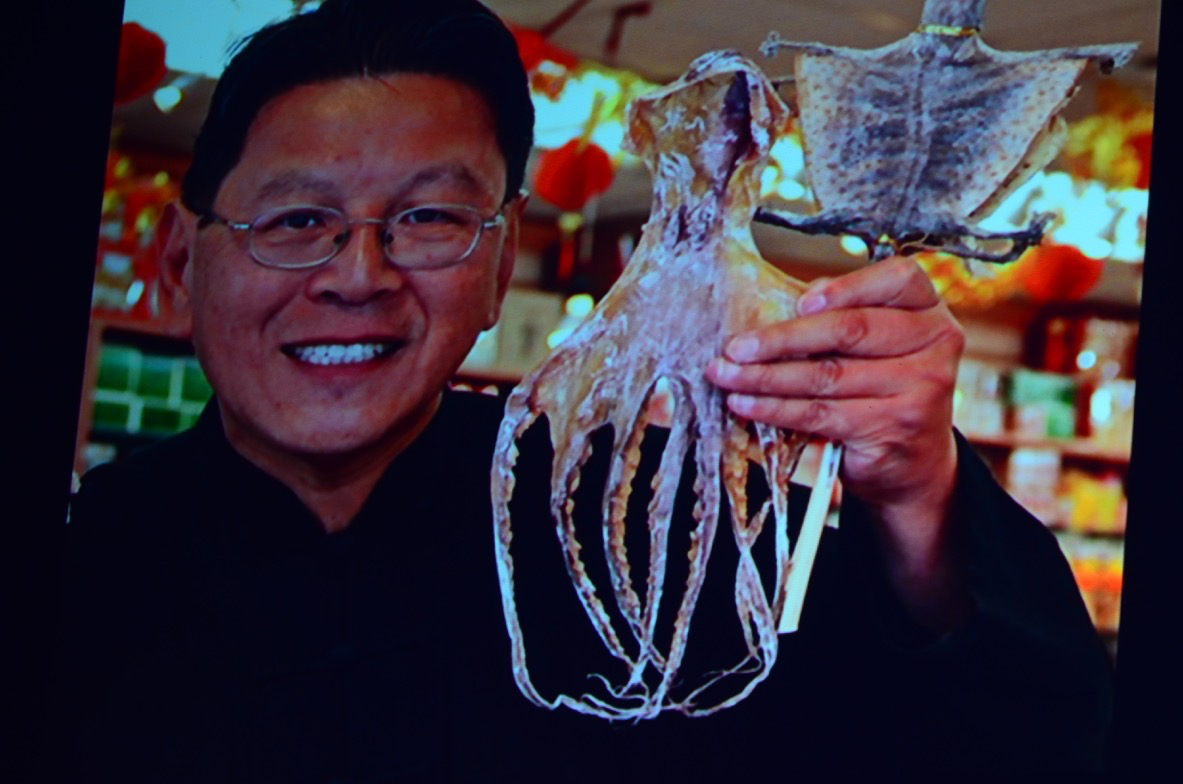 Kedrick James, a curly-haired tall gentleman wearing intellectual artsy classes in all black with an electric blue blazer stands like the University professor of your dreams. Once he opened his mouth, poetry and humour poured like a fountain without common sense for straight 7 minutes.  I wasn't quite sure if it was modern performance art, or a demonstration of the dynamic relationship he's trying to explain that our electronics makes our current day language.  As he was speaking, his laptop's dragon speak was transcribing his speech, yet clearly it was not what he was saying word for word. 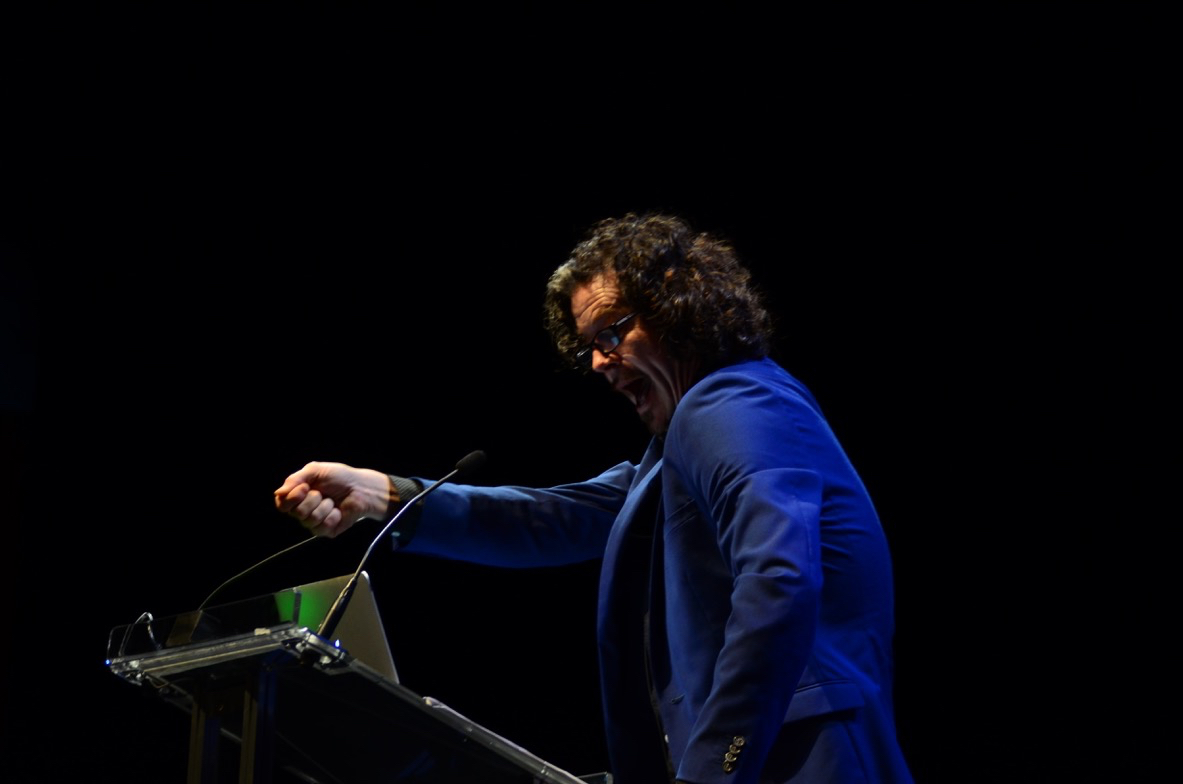 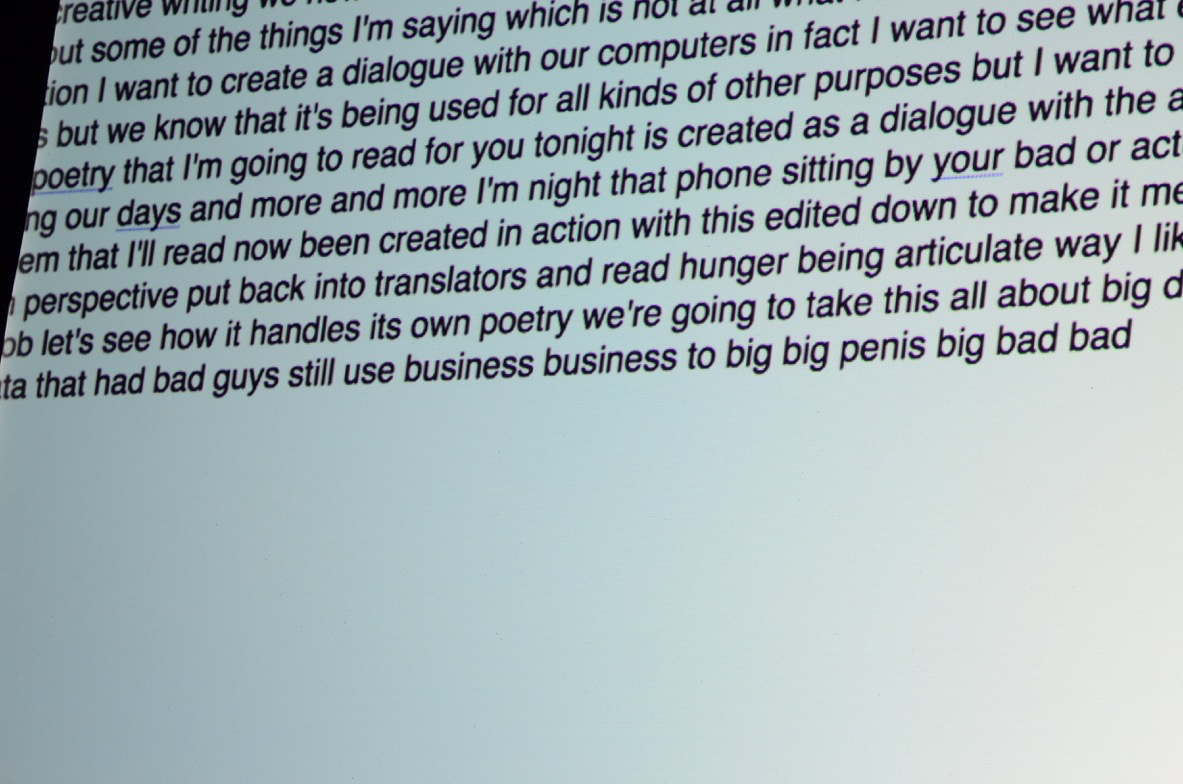 Baby faced Scott James, is a New Yorker who looked 20 but had the voice of a 40 years old man, commending the English language like a veteran knight yielding his sword.  His whole speech is dripped in sarcasm, we found out he came to Vancouver with his two adult cats and 10,000 books.  He praises the beautiful city and it's extra fit yoga enthused citizens, but complains about the lack of bookstores and the lack of regular reading habits.  He shares 10 of his favourite books, and asks us not to judge him.  He encourage everyone to enrich their minds and not only their bodies. 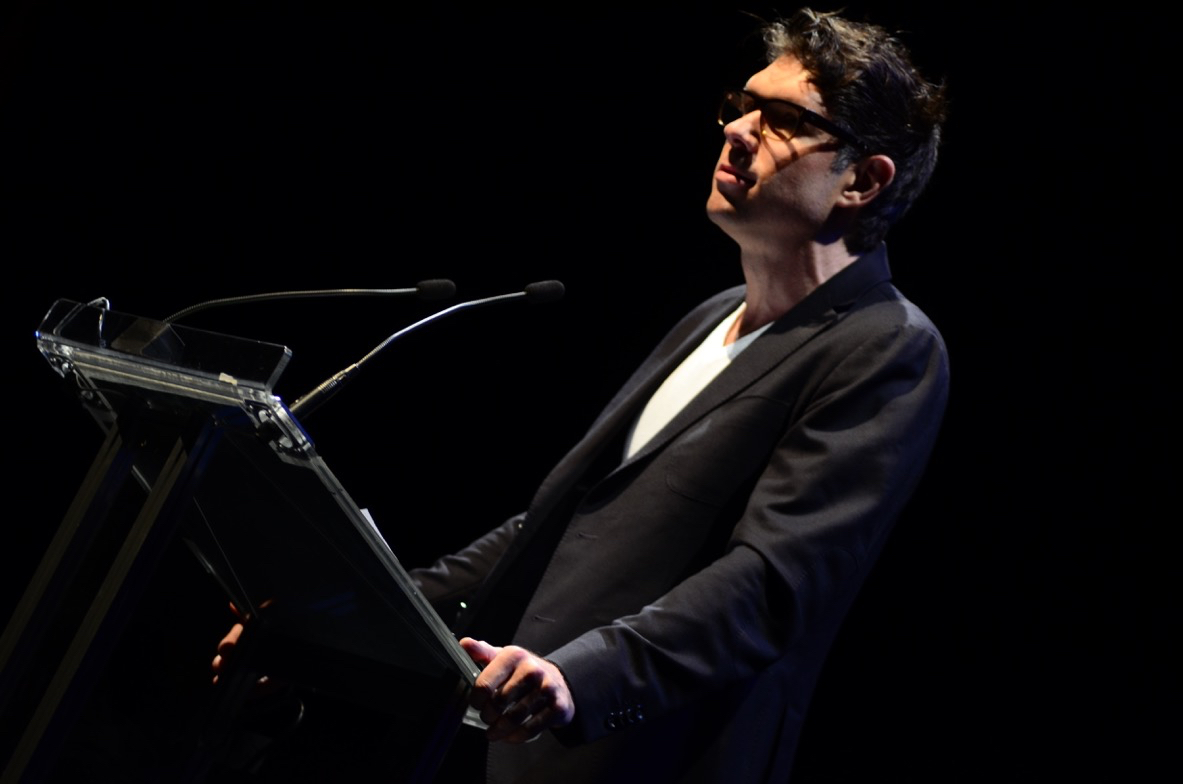 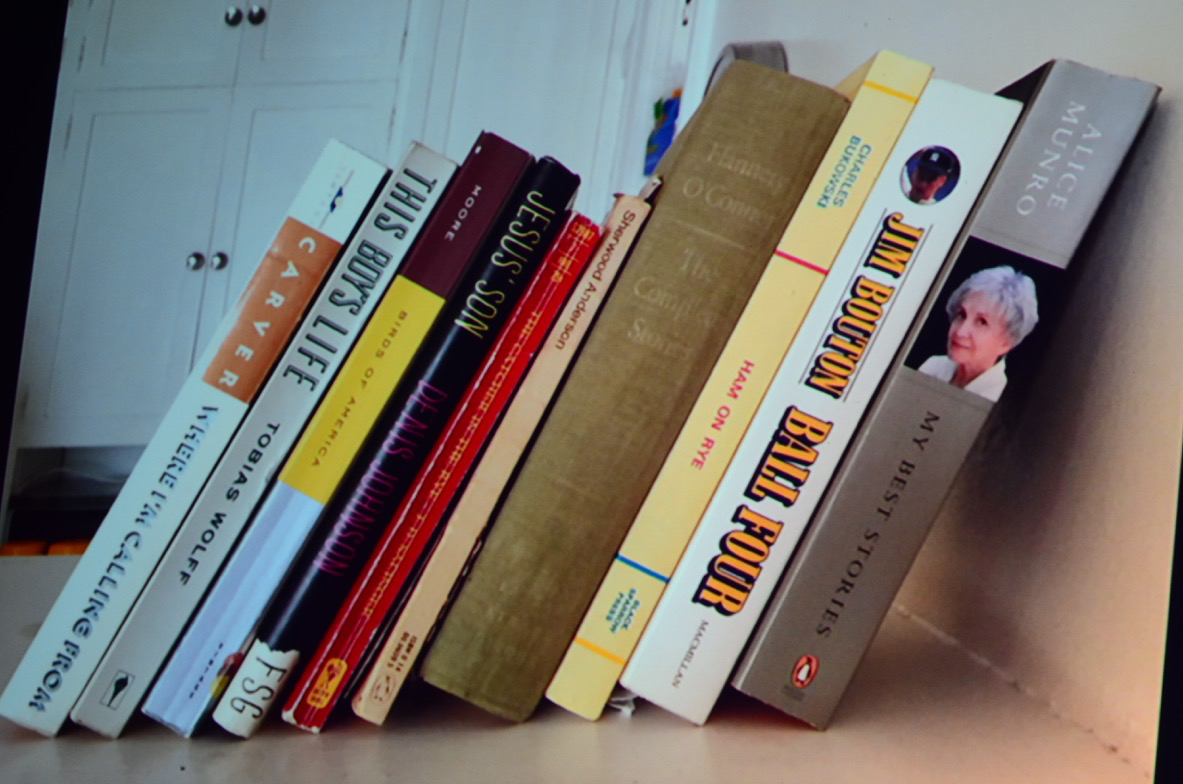 Farzana Jaffer Jeraj, author of “I cheat at meditation” is a sexy East Indian woman in a tight black dress in a burnt caramel leather coat.  She looks whip smart, grounded and sophisticated.  She shared the story of her worst breakup landing her in the ER room of a hospital. Sharing her insight to focus on awareness, especially when everything goes to hell in a hand basket. She reminds us that we're not what happens to us, we are not the circumstances in which we're born in or live through, but the constant awareness that watches everything as it unfolds. I really appreciated her speech, the time did not allow her to really hit the point. I believe she was eluding to the spiritual aspect of our lives, and how that will elevate above all the drama of life. Giving us the perspective and grace we need to pull through. 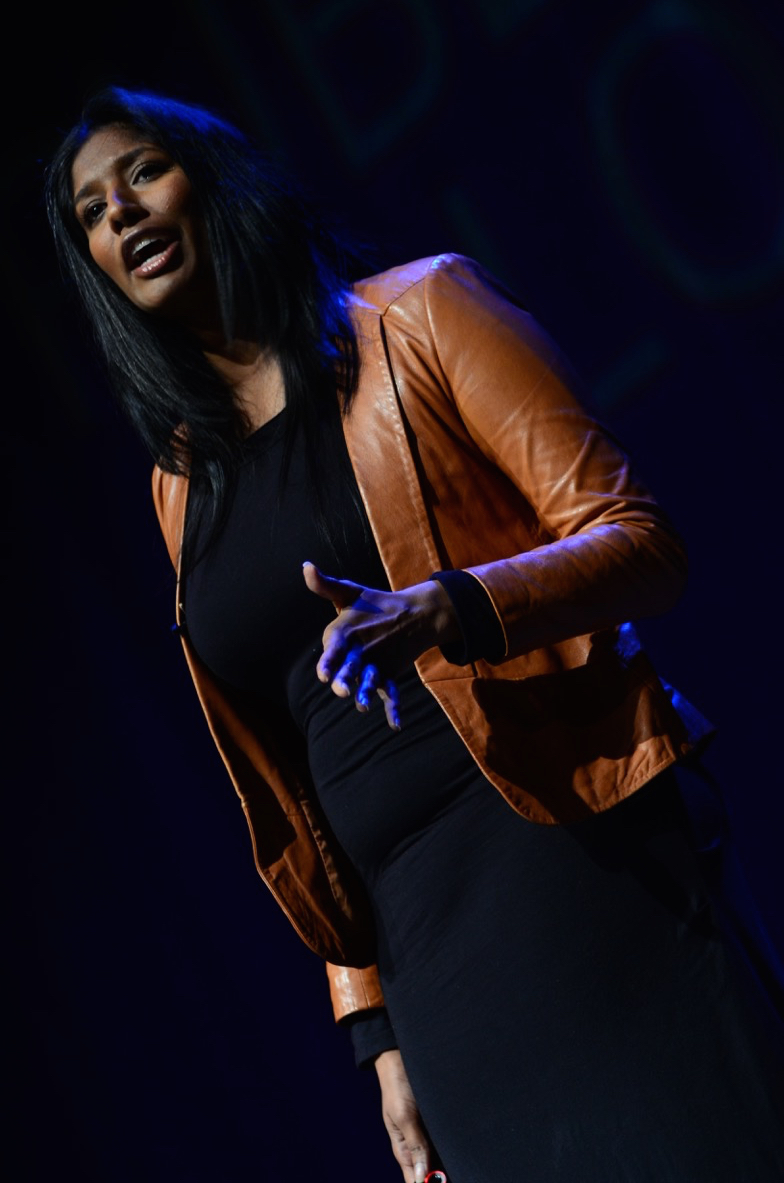 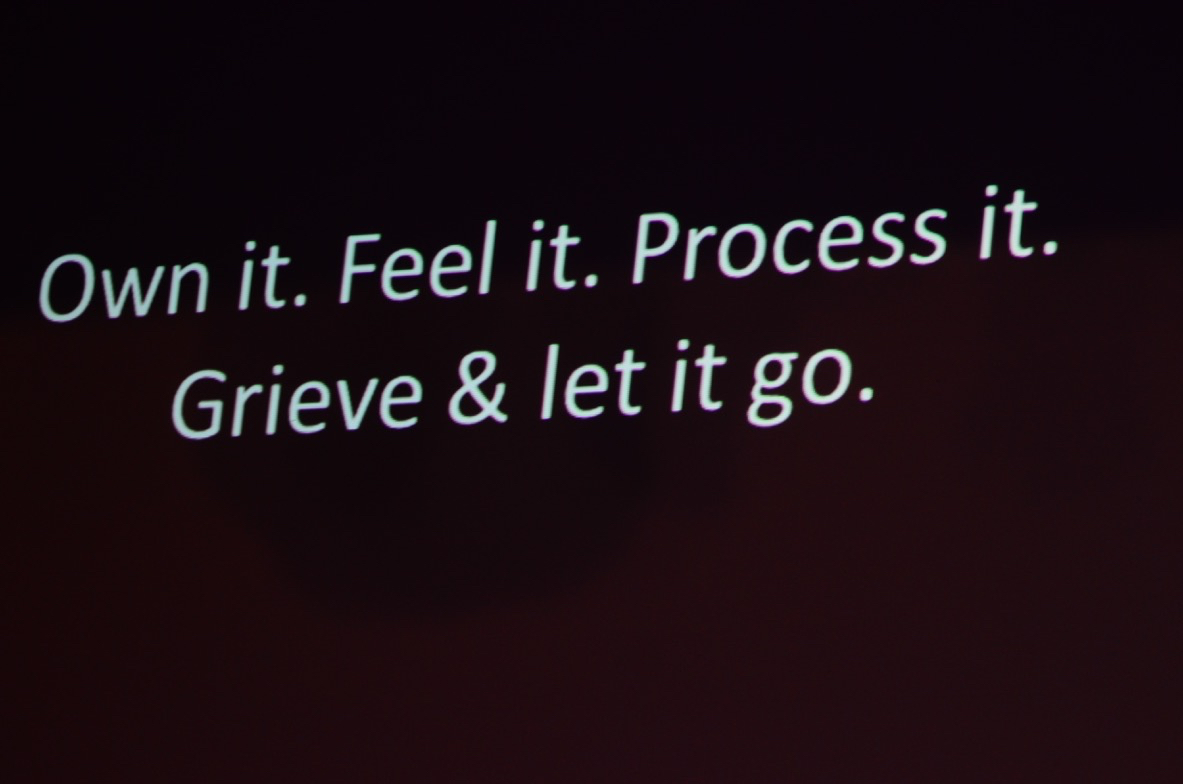 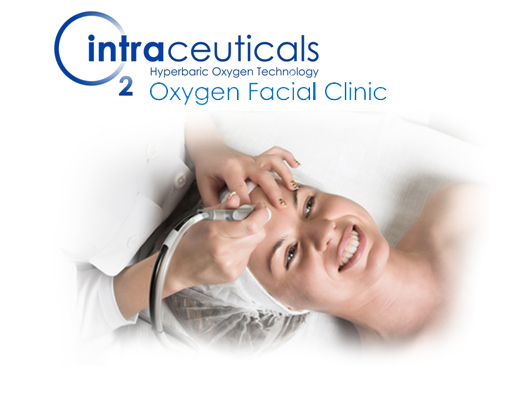 Three weekends ago, I booked an appointment at Oxygen Facial Clinic in West Vancouver to experience their heralded Oxygen Facial, and entered into a clean, modern medical clinic in West Vancouver and was treated with the utmost service. I learned from the skin specialist who treated me that oxygen infusion delivers all essential vitamins and minerals to the skin while Swiss Line skincare products delivers anti-aging effect through the renewal of cells. When I asked what kind of result people have experienced, the skin specialist informs me that it can make your double chin disappear, equivalent of a face lift without surgery and getting rid of discoloration and shrinking of pores, in addition to hydration.

When I inquired how does it work, the skin specialist explains that oxyfication is what keeps every cell in the universe youthful. Our skin become leathery like when it is deprived of hydration and oxygen. By adding oxygen through the facial, it activates all the other ingredients to work to their maximum benefit. Hence this clinic is more of a medical clinic providing leading edge innovative skincare treatment, than a spa that just makes you feel nice.

It was a luxurious experience for me. I had to change into an one piece towel dress, and my hair wrapped up with a hair band. I laid comfortably on a massage bed while the skin specialist put a machine that produced warm air over my face while she gently wiped my face with cotton pad. She then put some clear gel and massaged into every inch of my face, which brought on a tingling sensation. She then a scrub and buffed off the dead skin and cleaned my pores while asking about the history and condition of my skin. I asked her how to shrink my pores since I noticed them getting bigger over the years, and informed her I obsessively pick at my whiteheads. She warned me not to squeeze my skin, because that's what's causing the enlargement of my pores. She says that the warm steam machine she uses in the clinic naturally helps the pore to open so she could use clinical tools to remove the clogged up pores (be it whitehead or blackhead), and sanitize it. She also said they can use laser and after cleaning the pore close it forever so I will never have to worry about oily pores again. I was surprised to hear that since I thought laser is only for hair removal. the skin specialist after the pore cleaning, put on another layer of lotion which she very thoroughly massaged into my face, and neck. Then she gave me a shoulder massage which was heavenly and totally relaxed my upper body. I noticed my stress melting away and the tension from so much computer work releasing as my shoulder and arms go limp in her hands.

When everything is done, I checked out myself in the mirror, my skin was glowing. I wasn't sure if it had to do with all the stuff the skin specialist put on my face, but my face was supple, soft, and smooth like a baby's bottom. I felt refreshed and rejuvenated and ready for the weekend. the skin specialist informed me that this oxygen facial treatment is extremely popular with her clients, especially baby boomers who want to regain that V shape in their face, and is totally possible with consistent treatment in 2-3 months. I'm very intrigued by the Swiss Line products since they're full of vitamins, peptides, amino-acids and botanicals. It's 100% organic and this clinic is one of the few in Canada that has the license to resell their products. You may find out more about it at www.oxygenfacialclinic.com 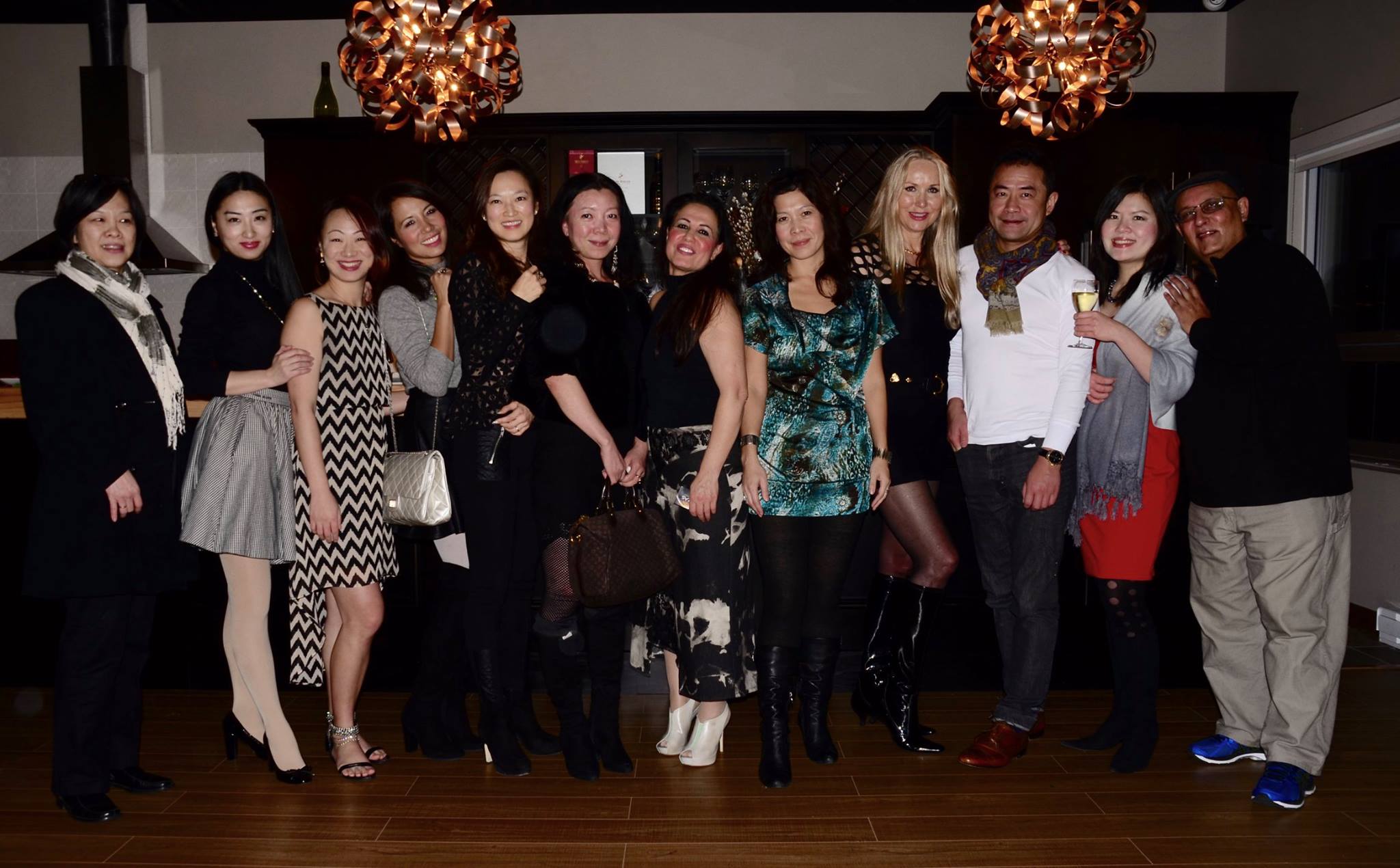 We had around 30 guests from a variety of media, both mainstream, ethnic media and food & lifestyle bloggers. CBC was present, so was the LINK newspaper and Fabulous Vancouver who brought a professional videographer and interviewed Barry McNabb. McNabb is the owner as well as Keith Nicholson, Director of Education at Winestains Wine Academy.  Iqbal Ishani from Hot Arusha showcased his 7 different hot sauces with gluten-free tortilla chips, which got popular reviews. He also provided live guitar music to add to the social mood.  Any place where good wine is flowing, socialization happens naturally. All the media got a private personal tour with Barry where he showcased the beautiful venue, including the many food bloggers that came and wine reporters. Yumi Ang from HelloVanCity was wowed by the immense collection, and took a photo holding the giant bottle of French wine that is worth $5,000.  Helen Wang from Fabulous Vancouver brought a professional photographer and videographer to cover the event, and learned something regarding the latest trends.  Watch the interview here: https://www.youtube.com/watch?v=HA8Z6p7Awrg 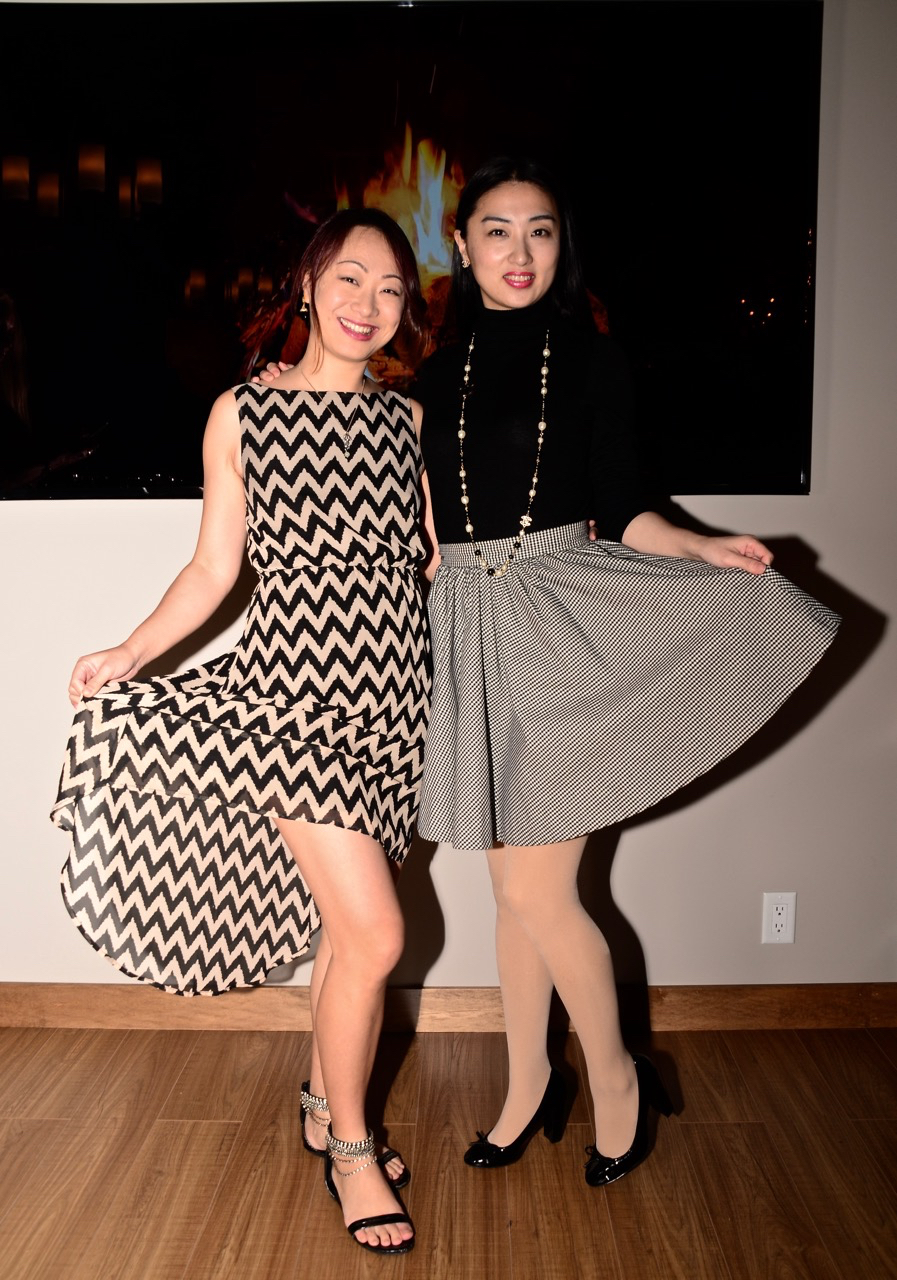 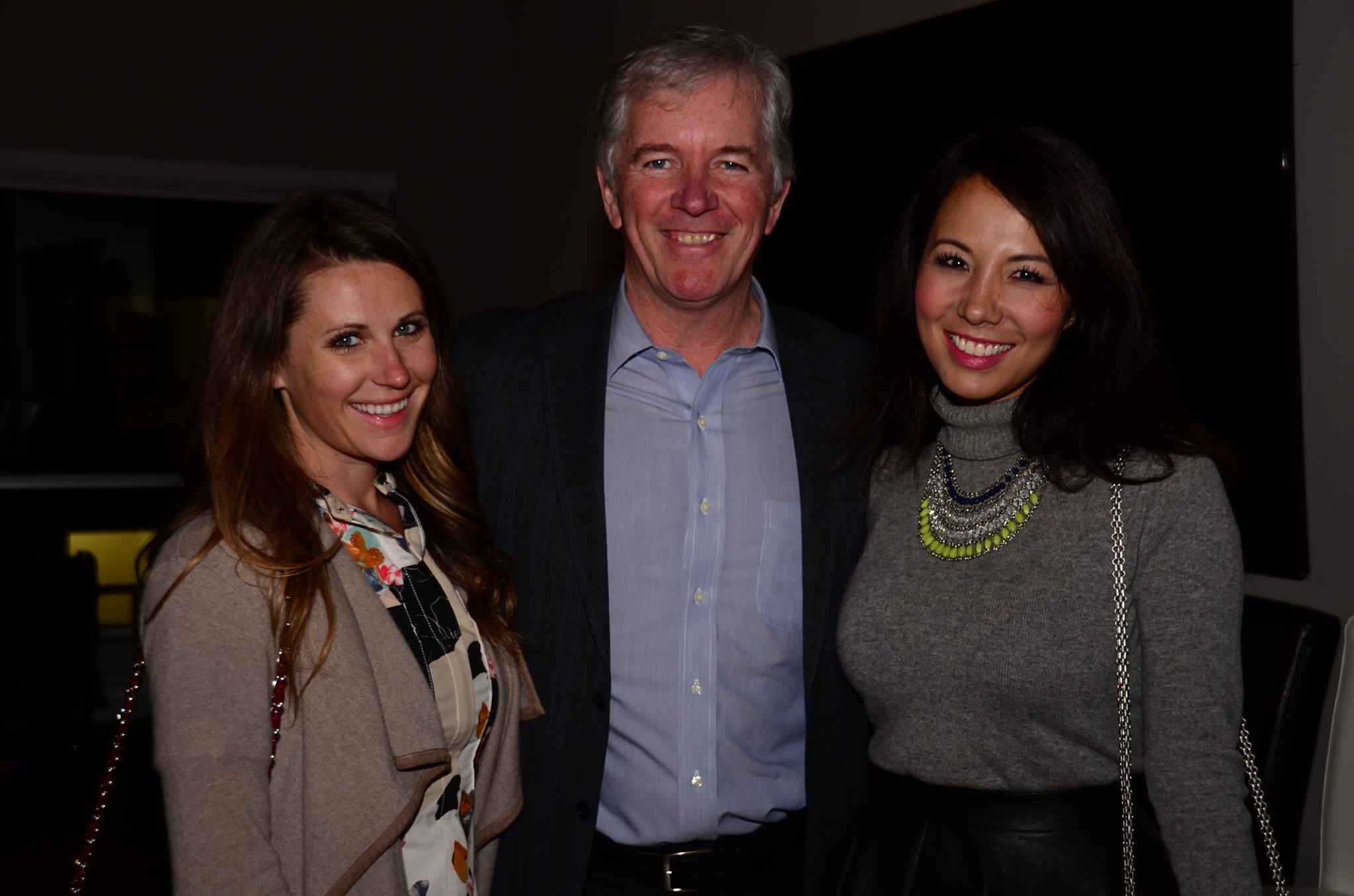 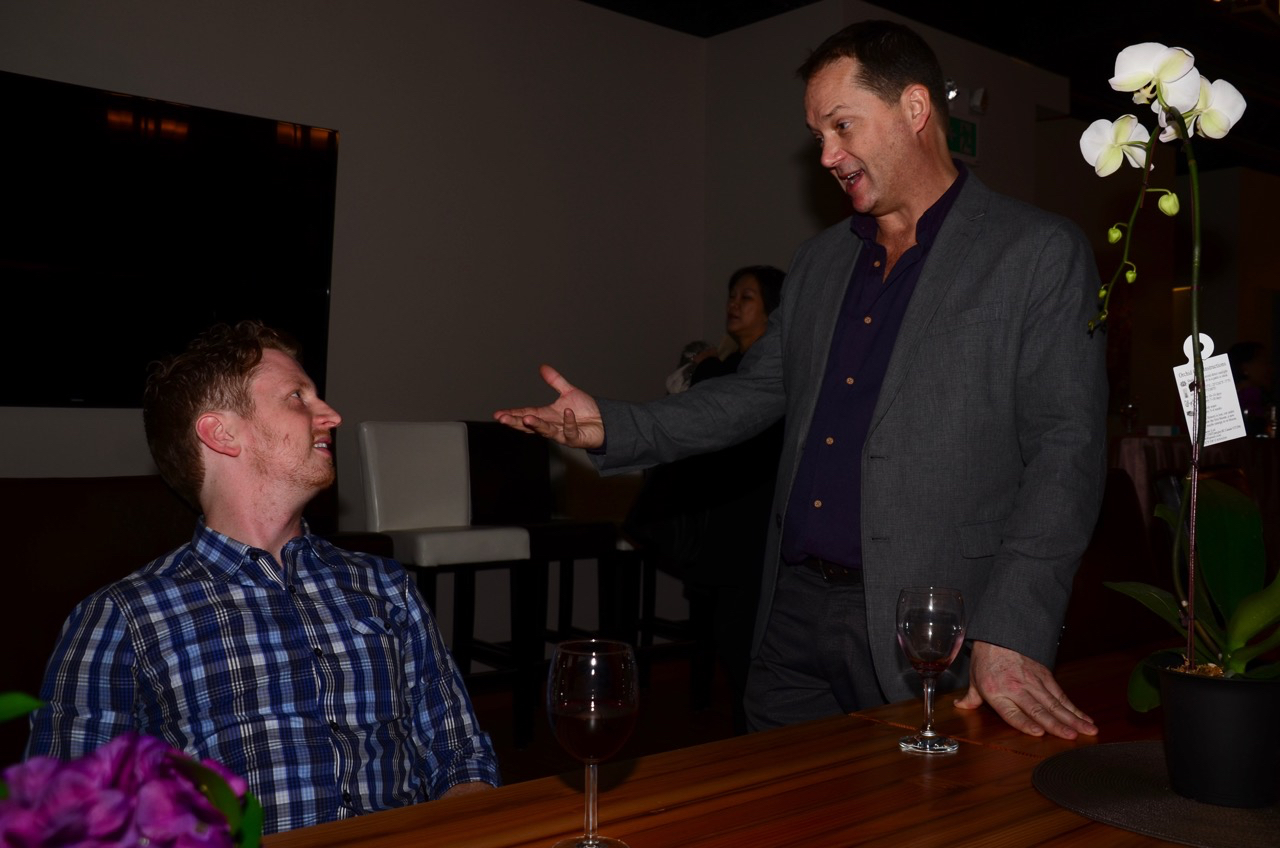 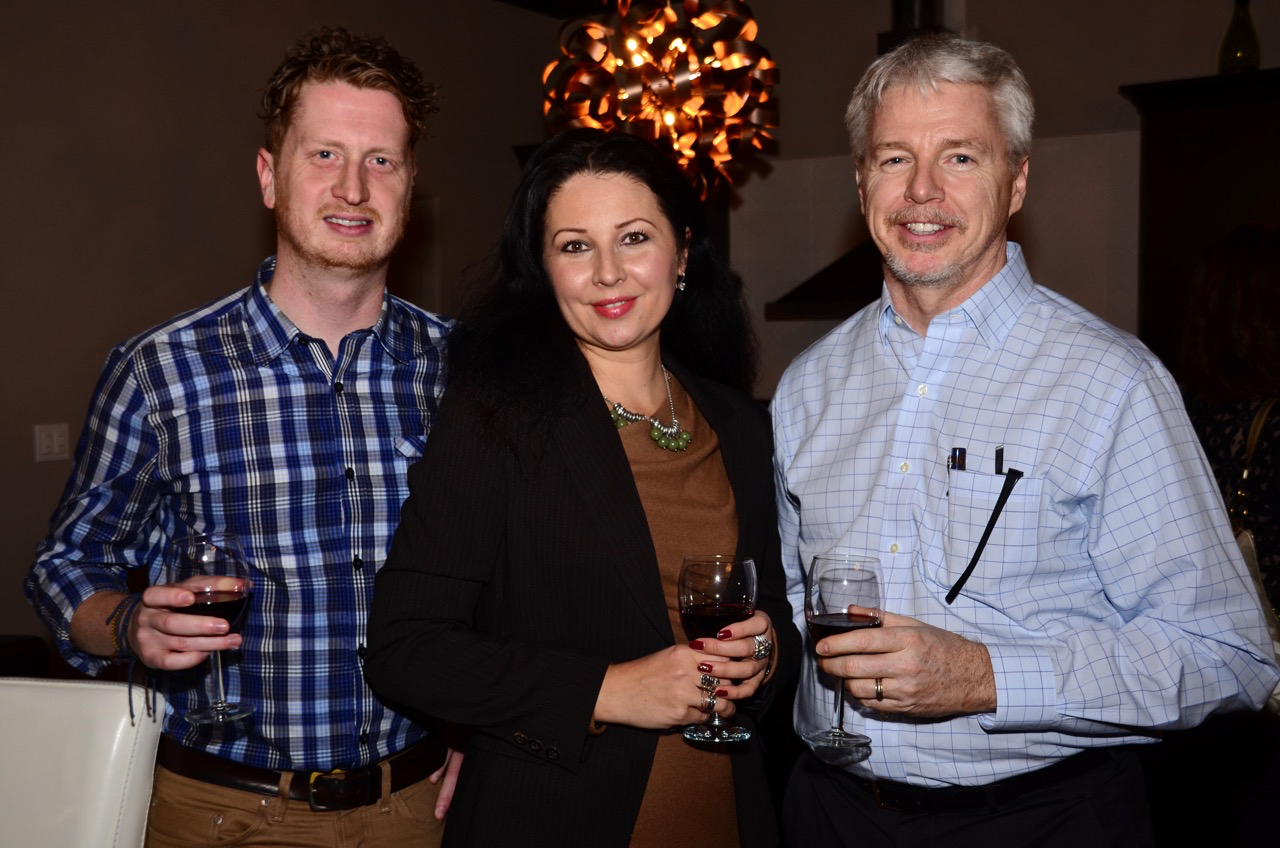 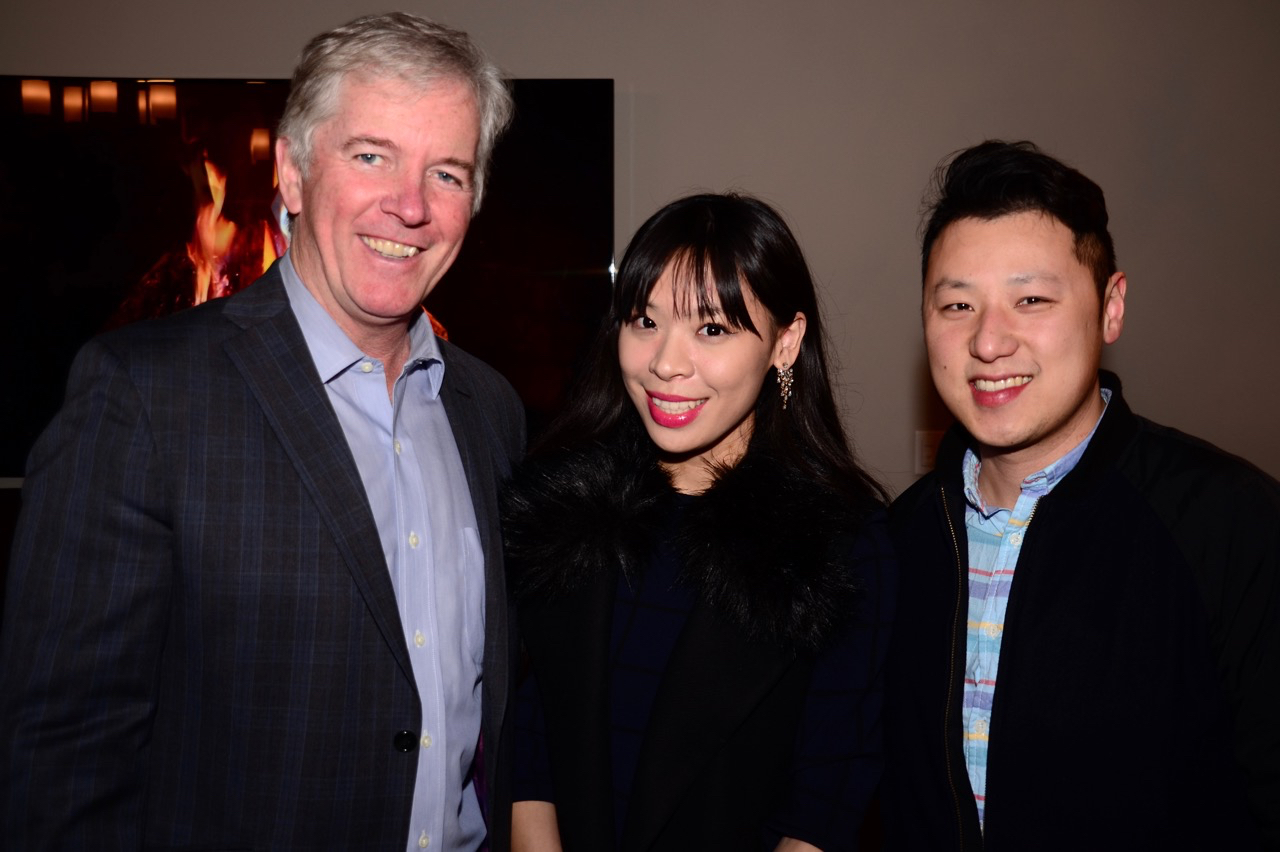 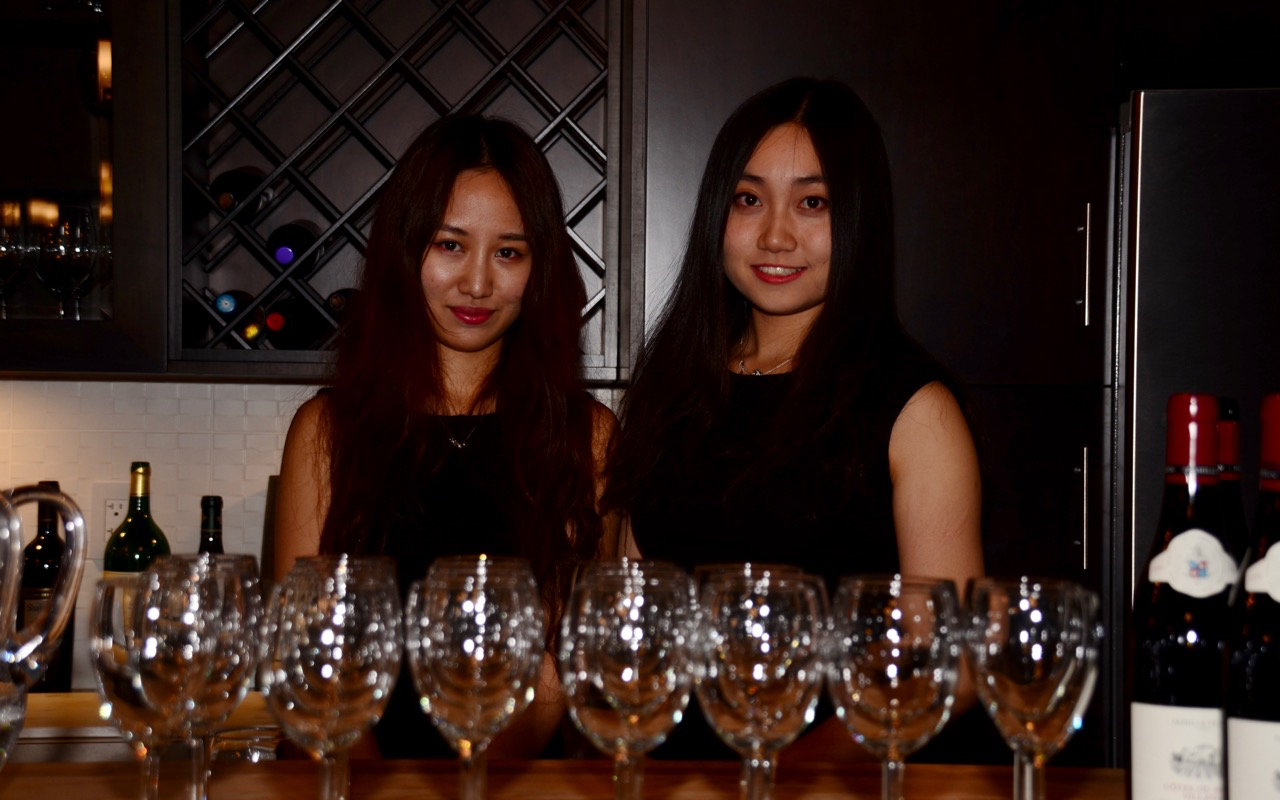 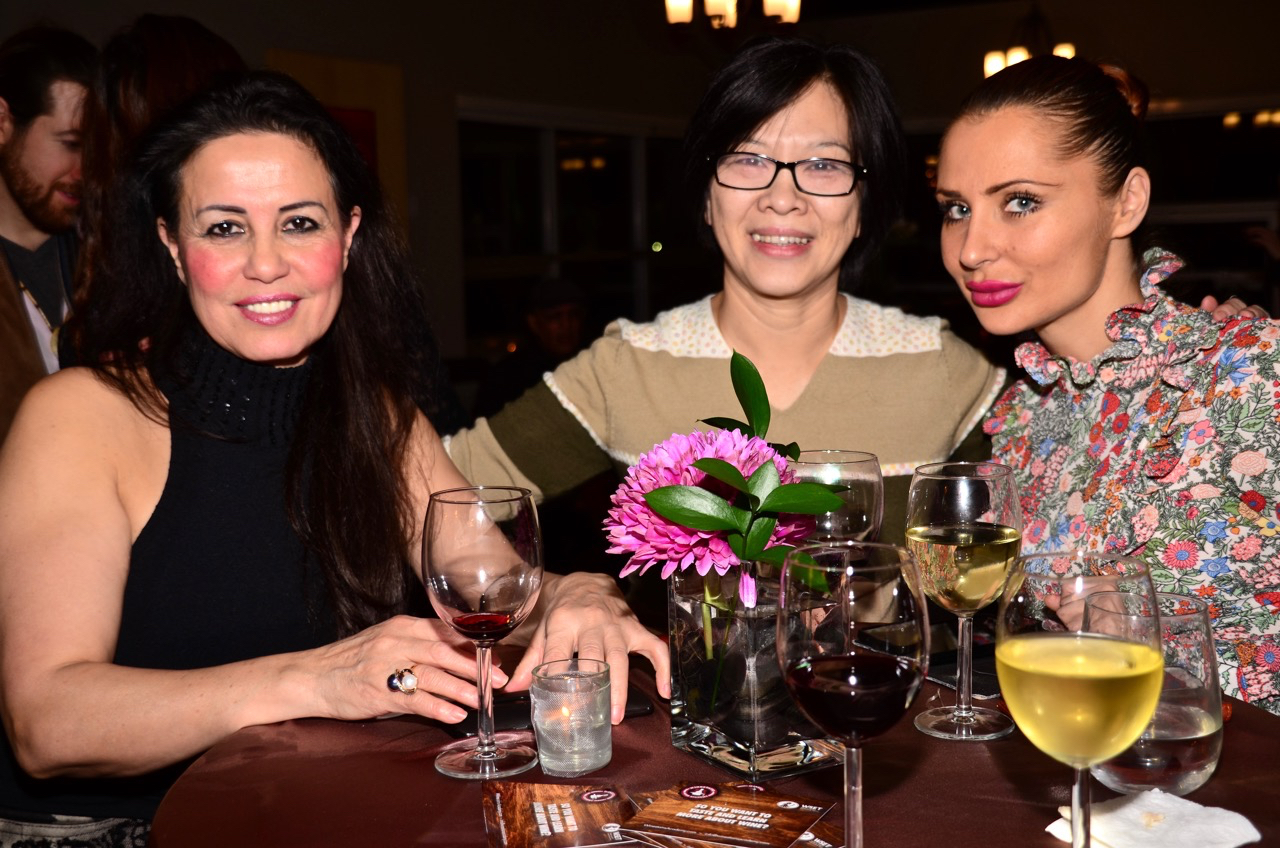 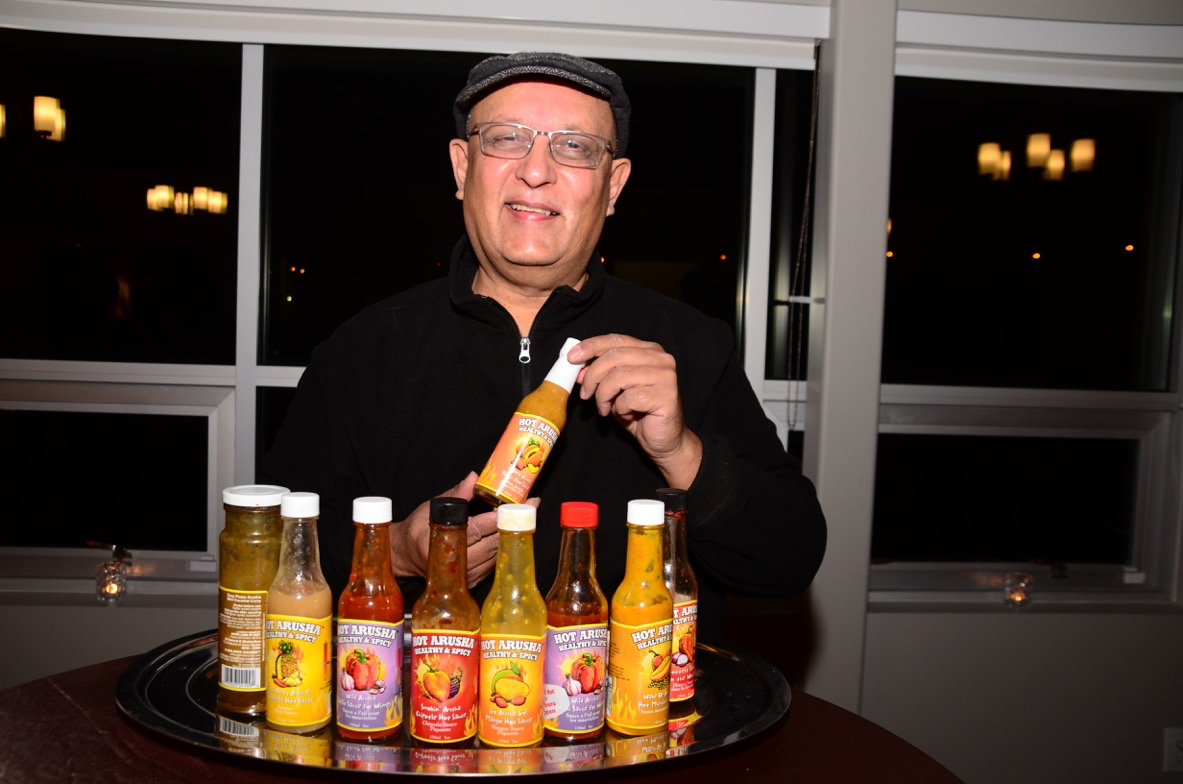